I was writing an article about death in SecondLife today, and found myself in a room with two computers. An ideal time to reunite Fox and Marie, who haven't met for the last four years. I was amazed to find that I still run into the same problems as I did four years ago. One computer didn't have Second Life, so the computer software had to be updated and Second Life added. Then neither avatar would rez properly, even after being online for an hour. And, wherever I went, the sims wouldn't rez properly. And then the sim we were on closed for maintenance. So it was a strange, shadowy, faintly seedy reunion.

Once I finally got Fox back on to the Second Life Grid, I realised just how much avatars have moved on while she's been away. When you're nearly five you can't really afford to be seen with an ancient default skin, a pair of strangely shaped boots and the standard duck walk. The quick way round this is to walk into a shop, buy an outfit and leave again. But I wanted Fox still to look like Fox, which meant thinking about what her defining characteristics are, what should stay, what should be modified, and what should go.
So she sticks with the jeans, although she's now wearing a more detailed pair. And she still has blonde hair with a bandana - which took ages to find. She has a proper skin, which isn't as overloaded with make-up as most. I bought her a new body shape, but I'm not happy with it - she's got very skinny, with arms like matchsticks. A better pair of boots, though they're still freebies, and some freebie jewellery. A back tattoo and pinned top out of her old inventory. A bargain-box set of animations for walking and sitting. And Shadow the Dragon stays on her shoulder. So she's still Fox - but she's also an avatar that I'm not embarrassed to take out in public.
As I look back through the wiki, I'm surprised to note that Fox only went blonde relatively recently.

The End of the World as We Know It

When Teen SecondLife was closed, Fox was stuck in a limbo between worlds. It seemed like a simple problem - just log in again, and reappear on the Main Grid, but that didn't sort it. So I contacted LindenLab who referred me to an age verification page. I went there and confirmed that I am still over 18, just as I was when LindenLab approved me as a staff member. But, no, that wasn't enough. It was only when I got round to chasing this up, that Linden Lab asked for a photocopy of my passport. With that to hand, I was allowed to move Fox back to the Main Grid, after an absence of several years. Her log-in screenshot showed her last location - so this is her final view of SchomePark. 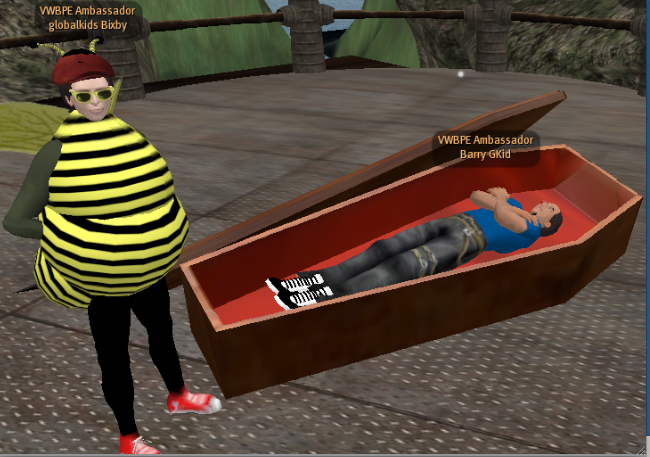 I attended a funeral for Teen Second Life last week. I was struck by a comment early on: 'Teen Second Life was in a category by itself, becoming one of the largest youth-led communities the world had ever seen, online or off, in charge of its own activities and economy.'Full details of the event (organised by GlobalKids)

I was at a webinar run from Finland yesterday (sadly, I was sitting at my desk in Milton Keynes at the time) when Schome came up on the screen - which was great because, as far as I know, none of the webinar speakers or organisers was a member of the Schome team. 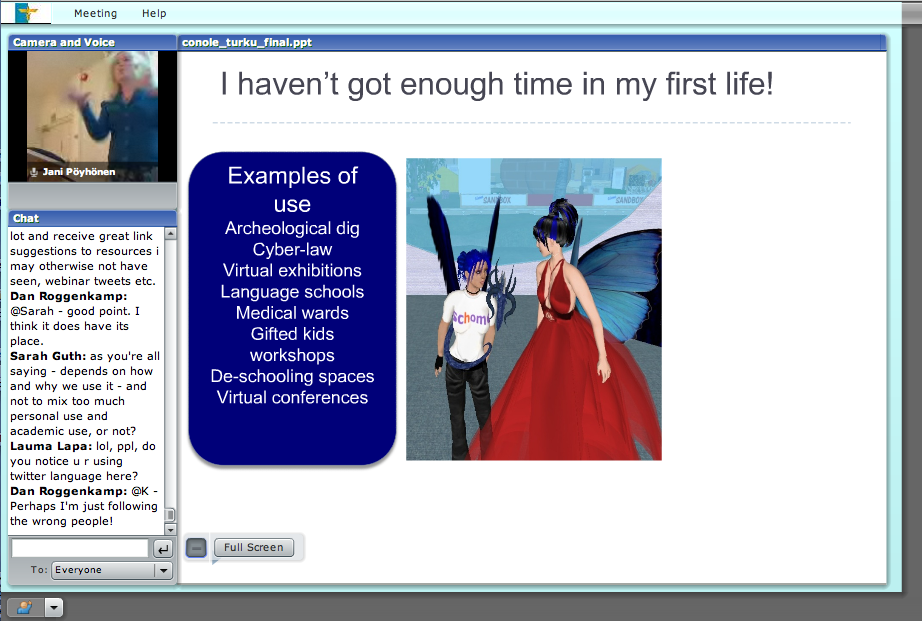 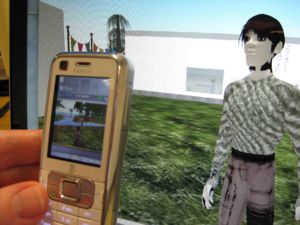 My colleague is working on the possibilities for learning with mobile technologies - particularly mobile phones. Researchers tend to be focusing on iphones these days - because they're fun and we all want one. However, at the moment they're too expensive for most people (that includes me), and so it makes sense to look at how people can learn with the technology they've got - rather than with the technology they might aspire to.
We discovered this week that you can run Second Life on a mobile phone. The picture shows his avatar on the Open University island, displayed on my laptop screen and seen from my point of view. On the phone is his avatar again - this time from his point of view. You can just make out my avatar, Marie, who is standing by the water.
Second Life runs fairly slowly on a phone, and it takes a fair amount of button presses to do anything other than wander about - but I was surprised that you can run it at all.
And, before you ask, no - we haven't got any plans to get people to learn things in Second Life via their mobile phones :-) 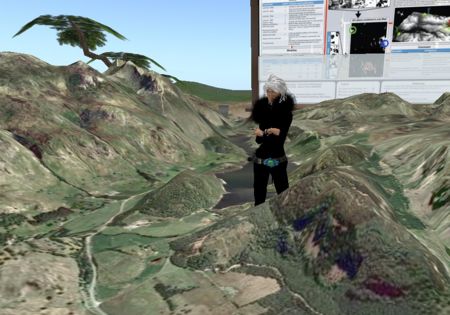 I was working on the Main Grid for a short while this work - discussing planning applications for the siting of wind farms in the Lake District.

I was impressed by the location - as you can see, I was in a photo-realistic version of the Lake District - although rather shrunk down, with me appearing like a giant bestriding the mountains and wading through the lakes. I'm not sure how they did it. It gave the impression of being beautifully terraformed and then having a satellite image draped across it - but I found myself wading knee-deep through mountains and sitting in the air above the peaks, so I guess the underlying land was not as carefully shaped as it at first appeared.

I was at one of a series of presentations where a developer had to make the case for siting wind turbines in one of three locations; a concerned resident had to make objections and I, in my role as inspector, had to decide which location was most suitable and give reasons. The concerned resident and developer were university students (not from the Open University) and I was a neutral outsider with little to go on except an hour reading up on planning issues before going in world. This was one of a series of sessions with different teams. The inspector in one group was Sun Mercier - who was involved with Schome Park in its very early days.

I was struck by how little use we really made of the painstakingly recreated environment. Yes, we wandered from site to site and looked at some tiny (presumably to scale) wind turbines. I assume the original ideas was that we would consider their location in context - but that didn't really happen. Sun said she didn't spot the turbines, as she had her camera panned out in order to see everyone in the session. As nobody pointed out the turbines, and someone was standing in front of them, she didn't even know they were there for most of the session.

On the other hand, I thought the in-world role playing was very valuable because it moved the session out of the lecture theatre or seminar room and out into the world. The students had to be on their toes because they had never met me before and had little idea about the questions I would ask. It wasn't as predictable as working with a lecturer they knew, who knew what preparation they had done and what their course had covered.

I didn't get to much of the ReLive conference, because I didn't have the money or time available. That was a shame, because it was obviously an excellent conference, with people Twttering and blogging and Flickring about it non stop for the entire two days.
I was lucky to be able to take part in the Schome presentation with Elsa, Amba, Gaea, Rowan, Schome Malone and a video of PeterT. Ahoy had sent slides along, and we were able to show the Hindenburg machinima which Pigment had just finished editing down. We also took along copies of a hot-off-the-presses My Schome, produced by Mars. I was delighted to find that RoughBounds was there too - and, at the end, I met up with Straad. Seven Schome staff members in the same room - a very unusual event.
Later, I popped in to the in-world café. I have a few snapshots here, but you can find more pictures by searching for the Relive08 tag on Flickr.

For when I finally get round to that article :-) Iraqi war memorial article Gaza Holocaust Memorial Museum

I'm used to locations in Second Life having some tenuous connection to the real world. This sim is the first I've visited where I've felt the designer has left reality somewhere far behind. She has created a surreal dreamscape where avatars drift through clouds of giant engraved lobsters while the snow falls and shoals of fish swim high above their heads. Fabulous.

It's the island of Syncretia, owned by Alpha Auer, and Marie's there as I type. From the sound effects emerging from behind this wiki page, it's pouring with rain there, and water is lapping at the shore, while an ongoing crackle of electricity, gives the sounds an edginess which they would not otherwise evoke.

There's more about the island, including some better pictures at the Not Possible in the Real World blog

Note to self: My sandbox is here.