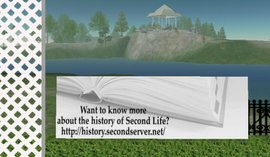 What is this section for?

So far, we've focused on what we can build and what we can do, and how SecondLife skills map on to real-life skills. I thought perhaps we should focus on different subject areas and think about how we could cover those on Schomebase, or look at how they have been covered (or not) elsewhere in SecondLife.
Anesa has already noted that, although SecondLife provides scope for trying out mathematical and logical skills, there doesn't seem to be a group or a site for mathematicians. And, we've also discussed the subject area of sex and relationship education. Should it be included on Schomebase?
Thought I'd make a start by discussing history and heritage - especially because the OU is just setting up a Heritage Studies course, so there's some interest in the subject and how it can best be taught.

I haven't got definitions of history and heritage to hand, but I'm taking history to mean something like 'the ordered construction and interpretation of the past' and heritage to mean something like 'historical artefacts which communities use to reinforce their identity'. 'Cultural heritage' is something else again - and includes non-physical artefacts such as songs and dances and speech patterns.

This is the oldest building in SecondLife. Which made me giggle the first time I heard it. After all, it's only a few pixels which people have been able to see for a couple of years, isn't it?


The mansion offers a heritage site which can be accessed by people all over the world. I think it's a good site for a heritage field trip.


I also think that virtual heritage is going to become an increasingly big subject. Are these virtual artefacts purely ephemeral, to be preserved only in online snapshots, or is there something that should be kept and preserved, to tell us something about where we have come from? Because if we don't know where we've come from, it's that much more difficult to see where we're going.

Interesting indeed. The greatest lesson for me in SL was that most RL (real life) concerns remain, mutatis mutandis, the same. Pixels conveying meaning, resulting of work, do have the same rights to memory as printed characters, events too and that's what we try to do when taking screenshots. In the detail, given the possibilities of duplication of the environment(take a copy) heritage may be a question of defining a protocol; who keeps a version of an object at a given time, allowing the original to be updated, and how to retrieve the copies for display (and where, and at original scale or not). --Vladtn 13:11, 02 January 2007 (GMT)

See a postcard from the ancient land of Da Boom, the first sim created, at http://nwn.blogs.com/nwn/2007/01/the_world_from_.html

Many sims draw on historical influences for their architecture - although they tend to go for a vague gothic feel rather than anything too accurate. An exception is Roma, which goes for accuracy and allows you to explore as a tourist or to participate by role playing.

Heritage in Second Life will be one of the themes of the Open University's new heritage course.