Overview of what happened

(who did what, when, how long did it take)

The role of Department Officers (DOs) was focused entirely on organisation, and helping other people take a part. In this way, it was the three of us, Achilles, Mars, and Explo, who started threads and polls on the forum, updated the wiki pages, ran sweeps looking for buildings, and made sure that everyone was ok with the regulations, and understood the "rules". These show the extent to which the Building and Planning Permission department regulated building in Schome Park, with the regulations being drafted, redrafted and changed many times, as we recognised that certain techniques were not working and different people suggested new ideas. With experimentation the department moved towards a formalised and systematic judgement of the builds that were to be granted permission to be built, and those that were unsuitable or used too many prims of the 15,000 limit.

Each week, I (Explo) ran a sweep, although different weeks I was more or less detailed, marking all of the builds I found down on lists, depending on whether the builds had received permission, as well as sending messages out to everyone with unauthorised builds reminding them to move them to the sandbox or apply for permission. It must be emphasised that these weekly sweeps were only part of the total effort, with everyone noting builds down when they found them or telling a DO. The aim is for people to remove their own builds, with builds only being returned by a DO or a member of staff after the owner had not responded to any messages for several weeks. Hopefully this encourages people to take a more active role in managing their own prims.

Prim counts were split between several people, with the work being shared, although Mars took on much of the regular responsibility. For a time, prim numbers were also recorded on a graph kept by Katharine Berry, for which we thank her, but unfortunately this was recently shut down. As you can see from the graph, which Mars compiled, the number of prims rose steadily in the first months as people constantly made new buildings and started filling the world up. It is a tribute to all the schomers that this rise was so steady, as people limited themselves. During August prim numbers fell in preparation for new students arriving in September, and this is a good example of how everyone pitched in to help a common cause. Since then, prim numbers stayed relatively stable, fluctuating from week to week, until mid October. This marked the arrival of a large group of new students who enjoyed experimenting with builds in the newly extended sandbox, raising prim numbers again. However, this was well managed by running sweeps in greater depth and keeping builds in the sandbox. This let prim numbers fall again. 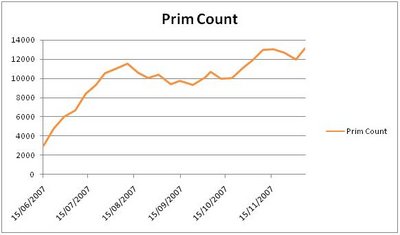 This graph shows how the prim count varied from week to week.

(what SL skills were involved - short descriptions of these.)

(any particular problems you had to overcome) One of the challenges we had to overcome was the links between the forum/wiki and Second life. We overcame this problem in the end by having a noticeboard in world with all that week's unauthorised builds on. When an avatar clicked this board, they'd be given the option of going to the main Building and Planning wiki page.

Also, when we were having meetings and in world discussions on how to progress, there are challenges. There is always the risk of someone crashing, or people not being able to turn up. Conversations don't always follow either; you could have several different conversations, all overlapping and making things confusing. In the end, we found that in world meetings never had a very good turnout, and raised more questions instead of solving them (which I suppose is a good thing).

The forum was probably the most important aspect of the planning permission management. It was on the forum that people applied for permission, submitted designs they had made in graphics or CAD packages, discussed the ideas, and finally agreed on the builds which were to be built, using the forums voting facilities where necessary, although at times these were not suitable for the complexity of the issues being decided. Using the wiki to collect images and information, posts could link proposals. The wiki was also inestimably useful in storing data on the builds, with lists of builds that had passed permission, along with their position, links to the threads which had discussed them, and other information relating to the build. Likewise, there were lists of builds that were currently applying for permission, although these were not updated as quickly as we should have liked, and a list of builds which had been found on a sweep. These gave all the information needed to reference builds, and, because the site is a wiki, it allows people to add builds they had found while flying around, as well as encouraging the whole community to take a part in regulating builds. On the other hand, most of the changes seem to have been made by a few people, which seems to show that habit is a stronger force than irregular desires to update the wiki, although these certainly helped, with a number of redesigns to the building and planning permission wiki pages making the pages easier to use and more attractive. It is almost certain that using inworld techniques alone, the system would not have worked, as it would rely on people making their own methods of data storage, and would leave out those people who were not inworld at the time of discussions or decisions.

Go back to the SPP Phase 2_Report page