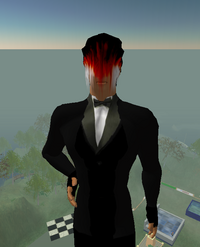 My Avatars name is Aston Schomer

I don't have much to say really except I love Second Life and all the people on it!

I have no intention to offend anyone but I am extremely anti-religious. I think that religion is a force of "evil" and should be stopped at all costs. I am an atheist and extremely sure of my beliefs.

I don't like George Bush and his current government

I went to all those meetings

I was the best man for Trixxie's and Wintermute's Wedding

Well I'm a member of the General Affairs department along with Topper and TibbyFairy. Right from the start of SPii General Affairs have had to deal with a few breaks of the AUP, but now it seems that people on the island are living in peace and harmony again.

So, yesterday I went onto SPii! I haven't been on for ages you see. Hapno showed me all the developments on the AI emporium which where absolutely amazing! It's like going into a high security prison or something when you go down into the "vault" which is apparently to protect the AI's from us because if we talk around them their programming gets messed up! Must put some pictures up...

Anyway thats all from me!

My dear Aston, a High Security Prison, you say? well....theres an interesting idea....-Hapno

So SPii opened! The new island was amazing!!!!!! I really want to see if the temple really does have a secret entrance...

My birthday was on the 15th which coincidently is when SPii opened so it was a bit like a birthday present! SO nice to get back and catch up with everyone!

I really, really want my inventory back now... How come some people have eh? I think the staff have favorites...

but that's just my crazy opinion!

Hey, we haven't even sorted our own inventories out. That's why we're wandering around wearing library clothes at the moment.  :-) Fox

So everyone guess what happened today?

My graphics card melted! It's true! I was playing an invigorating game of battlefield 2 and I suddenly realised I could smell burning! Then out of the back of my computer smoke started to come out! So I turned it off took off the shell of the computer and the plastic on the graphic card had melted and was running down onto the fan. So I left it and I got back when it had cooled down and of course the plastic has set...

SO the fan won't work!

computer number 3 sent back to the shop

My bliki is now getting so popular I'm having to buy, yes buy more bandwidth!

Well I admit I'm starting to find reading the posts on the forums VERY boring. So many posts, so many!! It's also calmed down a bit since SPii was announced so no more arguing (I mean discussing) with Mars! I can't wait to get back in but it looks like it won't be until well into June!

And so concludes the third entry from my ever growing in popularity bliki, now recieveing 20000 hits a month

Well when I came home because all the computers in my house were occupied I went on the forums on my Nintendo wii. It's great being able to go on the internet on the wii! Except... It takes forever to write posts! Because you can use the wii remote like a mouse you point it at the TV and a cursor comes up. Typing is very anoying though because a keyboard comes up on the screen but you have to click on each individual letter and it takes forever!!!!!!!!!!!!!!!!!!! So I ended up spending about 1.30 minutes on the forums when I normally would have been on for about 30mins! So I'm a little grouchy after looking at screens for 2hours!

And with that I conclude my second post to my bliki!

I've decided to start a bliki after seeing Mars's so thanks for the idea mars! - you're welcome :-)

Well it's been a while now since Peter T first announced SPii. I was shocked and astounded when it was announced specially because of all the work everyone put into the first island!

I've started using the forums recently so thats one plus side of Schome Park being closed! Really though how can Trixxiee have 1568 posts!!! I've got about 86... She's even got more than Peter T! Discussions have been VERY heated on the forums. Me and Topper starting our anti-megabuild (what was it?)(oh SParkers against mega-builds) campaign caused a little tension maybe...

I can't wait to be allowed back into SPii. All the stuff Woop/Dan has been building looks fantastic! Specially that volcano!

Well that concludes my first entry into my new bliki. Thanks for reading