Hanson spent some time working on a ship's wheel. It looks great - it's large but when you consider you could have 3 or 4 persons handling the wheel in heavy seas it's just about right. 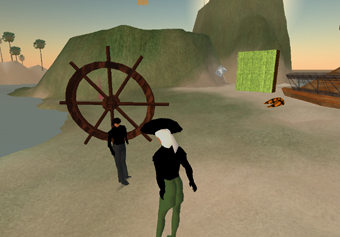 I also spent some time creating a name plaque for the ship - it's supposed to look like a decaying/rusting metal name plaque - but I think it also looks like a seagull flying against a sunset. Maybe I should hang it in the 'Modern Tate' or perhaps the Media Centre :) 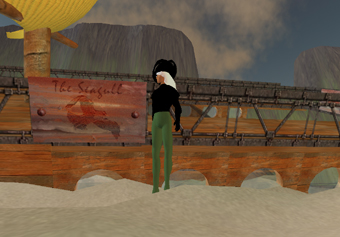 Here it is in all its glory!

We've decided to create a permanent place to remind ourselves of our arrival on SPii. Hanson SParker (mainly) and myself have 'built' a wrecked 'ship' that we have decided to call 'The Seagull'. Here it is at the beginning stages of its design.

I've decided to start documenting progress with the Scavenger Hunt that we are hoping to get ready for January 2008. The idea behind this is to provide an 'event' that can be used by new arrivals to the island (as well as existing members). Doing the hunt should allow folk to explore memorable places on SPii, learn some of the cool things you can do with the tools and interface of SL and meet some of the existing residents of the island.

Players of the scavenger hunt will be directed to different areas around the island by clues hidden within 'waypoints'. Here's an example of one below.