We've turned the community history into a kind of blogg - in the hope that this will encourage folk to add to it - so go on, add an entry ....

There are 4,778 total pages in the database. This includes "talk" pages, pages about The Schommunity Wiki, minimal "stub" pages, redirects, and others that probably don't qualify as content pages. Excluding those, there are 827 pages that are probably legitimate content pages. There have been a total of 2,916,267 page views, and 23,237 page edits since the wiki was setup. That comes to 4.86 average edits per page, and 125.50 views per edit.

There are 4,774 total pages in the database. This includes "talk" pages, pages about The Schommunity Wiki, minimal "stub" pages, redirects, and others that probably don't qualify as content pages. Excluding those, there are 827 pages that are probably legitimate content pages. There have been a total of 2,901,652 page views, and 23,217 page edits since the wiki was setup. That comes to 4.86 average edits per page, and 124.98 views per edit.

Wiki There are 4,773 total pages in the database. This includes "talk" pages, pages about The Schommunity Wiki, minimal "stub" pages, redirects, and others that probably don't qualify as content pages. Excluding those, there are 826 pages that are probably legitimate content pages. There have been a total of 2,885,601 page views, and 23,199 page edits since the wiki was setup. That comes to 4.86 average edits per page, and 124.38 views per edit.

Wiki There are 4,730 total pages in the database. This includes "talk" pages, pages about WikiWorks, minimal "stub" pages, redirects, and others that probably don't qualify as content pages. Excluding those, there are 822 pages that are probably legitimate content pages. There have been a total of 2,857,220 page views, and 23,069 page edits since the wiki was setup. That comes to 4.88 average edits per page, and 123.86 views per edit.

One year on from when the first student came onto Schome Park - and some of the same students are still with us. Check out the Schome Park Programme for more info ...

We're just about to launch the SchomePark island for the NAGTY students. Exciting times! we're moving from a small team of university researchers exploring Second Life to having some real students getting involved. Lots of last minute tidying up, and anticipation... how will it go, what will the students teach us?

Ok - so you could be forgiven for thinking that the community had withered away and died if you were going by the lack of entries in this bliki recently - but nothing could be further from the truth. Things are really taking off - just check out the schome community forum if you don't believe me.

A lot of our activity since October has been focussed around using Second Life - you'll recall that Kieron suggested that this might help folk think more creatively about visions for schome. We have been bliking our activities in Second Life in a number of places:

Today Pammaunders signed up - brining the number of registered users of wikiworks to 250. Welcome Pam!

We ran the first schome workshop for home educators today - attended by around 20 folk (ranging in age from 2 to much older). Despite the torrential rain which caught one group whilst they were out on the OU Nature trail (being guided by handheld computers with satilite navigation) I think folk had a good day (. Other activities included exploring 'Power Tools' on Tablet PCs and discussions of what schome (the education system for the Information Age) should be like. I overcatered - even by my standards there was too much pudding - lucky I brought my tupperware with me ...

The Schome Community Forum was launched today - this provides an area where we can discuss any aspect of schome. Our hope is that this will help to generate more activity within the schome community - let's face it very few people were brave enough to edit WikiWorks. At this point WikiWorks and the Schome Community Forum have seperate registration and login, which is a pain. We are aiming to merge the two systems - once we have worked out how to do it! Many thanks to Nigel Robson for all his hard work in the background.

Kieron, Deirdre, John and I have just returned from a week at the IFIP 'Imagining the future for ICT and education' conference in Norway where we were involved in leading four sessions:

Of course it was not all hard work - Kieron had the brilliant idea that we should use a 3D virtual reality world (like Second Life) to build schome - check out the schome techy blogg for more info on this (not posted yet but it will be very soon). We also had to go on a trip up a fiord: 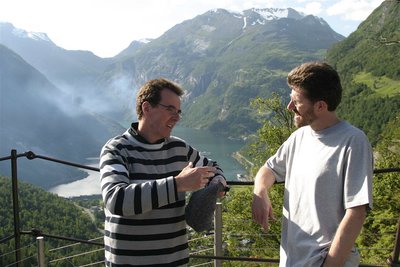 Kieron & Peter up a fiord

I agree the key is developing activities - above all there needs to be something in it for the members. We are all invited to join so many communities these days.

So my take is that the system is necessary but far from sufficient.

Sorry for taking so long to get back to you - I agree with you entirely - the question then becomes what the most fruitful activities might be ....

We are trying to build a community of folk who are interested in schome - and have been using WikiWorks (and trying out a number of other technologies - see the Schome techy blogg) - and have been talking with folk ...

I guess up till now I've thought of the community as being supported within WikiWorks (or some other system) - and I've been struggling to find the best available system to use - and I guess I was moving towards thinking that we would need several different tools which complemented each other but ideally could be integrated so you only had to login once. I was particularly anxious about how to develop the sort of community feeling you get in systems like eBay, through indicators of members activity/standing within the community - and the need for easier to use discussion facilities. But I think I've been worrying overly much - cos the community is not 'in the system' - the system just provides one form of support for the community, which actually exists in the real world and interacts through all sorts of different media (including WikiWorks, email, phone, face to face, skype, FlashMeeting, etc..).

If this is right then the key is not so much developing the technologies to support the community, but developing 'activities' (joint endeavours that we can engage in).

Does that make sense?

The first email update for the the Aspire Pilot was sent out today to some 200 folk who we have identified who have an interest in the future of education and/or creative thinking within education - keeping fingers crossed that this helps generate more communication within WikiWorks - it is proving quite hard to get folk to post stuff in here - if you can think of ways to help overcome this please suggest them (for example by posting a message in here - or on the associated discussion panel ....).

Today WikiWorks achieved another landmark - it crossed the 100,000 page hit figure! We are currently averaging around 500 page hits per day.

Today - for the first time - someone other then PeterT dared to edit the MainPage - go for it Steve - take ownership of this space! Let's hope that folk respond to your request for help. :O)

Wow - things have really taken off since September - the community now has 172 registered members and over 150 'content' pages. There have been over 97,000 page views and over 2,000 page edits! So activity is picking up ...

We ran the second whole day Aspire Pilot workshop, this time at Woodlands secondary school in Basildon. I (PeterT) had a really great day - being somewhat 'naughty', but Nicky (the teacher who is coordinating our work at Woodlands) was very patient with me! We spent the whole of this session looking at the students' visions for schome (yes we had learnt from our mistakes in the 1st April workshop)....

Kerry, Anna and Peter ran the first Aspire Pilot workshop at St Bonifaces College in Plymouth. An auspicious day you might think - no practical jokes in evidence - we tried to cram too much into the day - and realised that we needed to allow much more time for folk to develop their own visions of schome before they could develop provocations that would encourage other people to think creatively about visions for schome ...

Kerry Chappell was appointed as the Aspire Pilot Project Officer and the project began.

Contracts were signed - The Aspire Pilot had been funded by NESTA!

The number of registered users of WikiWorks reached 50 - but would they be active participants ...

An invitation was circulated to colleagues in ITTE asking folk to see if any of their students would like to contribute chunks of info on 'educational approaches' to the schome website (WikiWorks) - we had a fantastic response (particularly from Nottingham Uni students) - which led to the development of the sections of WikiWorks on Educational approaches, Education systems by country and Educational thinkers.

The formation of the schome research group

Things really started to take off - Jonty Rix joined the Schome Research Group, the website was set up, funding was obtained ....

Eureka - well it was in the bath that the byline was born - the importance of the links between home and school - the need to provide something better than school (which didn't seem to have changed much since Schome's pre-history) - thinking about Ultralab's Not-school project - it all came together:

Over the next few weeks PeterT talked with colleagues - and Kieron Sheehy took the bait. The schome research group was formed - no its schome not scone or scam Kieron!

He had hated school so anything like teaching was out of the question - but then he discovered Seymour Papert and the idea that computers might allow us to re-think how children learn (or more accurately how they are taught). The germ of an idea had been planted.

He stood with his parents, watching the little set of traffic lights by the door to the headmaster's study. The lights changed from red to green - they went in. The headmaster, a distant figure that the young man had never spoken with before, greeted them from behind his huge dark wood desk. He ignored the youth, and spoke instead to the parents. There was a problem - the head wanted to explain to the parents that despite their best efforts the boy was not progressing well - his English was still so poor that they feared that he would fail all his O Levels ...

A little boy stood crying in front of the miriad of timetables on the huge notice board in the school hall. He was confused, scared and very alone.