Here follows a brief report on the goings on at the marina for the 1st ever regatta of schome park! The Events were power boat and sailing. Sailing was a test of steering and endurance the powere boat course combined scripting and control.

First day and first time for the marina, the first event on the calender was the powerboat trials. rules were simple, get round the course twice in the fastest time. First up was liony schomer who got round in 313s, this was then followed by whello in 307s giving him the lead, up to this point the sch-op boats were proving to be capable in this terrain, however our next competitor baso schomer showed the spirit to bulid his own boat for the contest, designed like a jet ski (in fact this was a very powerful catermaran with sails), his boat was the fastest on the course... but was it too fast? the boat had some problems due to the hover techinque used and ended up sinking, good for him he carried on round the course to the end, most people would of given up but he showed the spirit of creating a boat for the course and finishing to the end ,

We were due to have our 4th compeitior, mark cabaret on the course and just as he got his baot ready, a horrific occurance took place

Lets see what happened to faji and mark's boats... 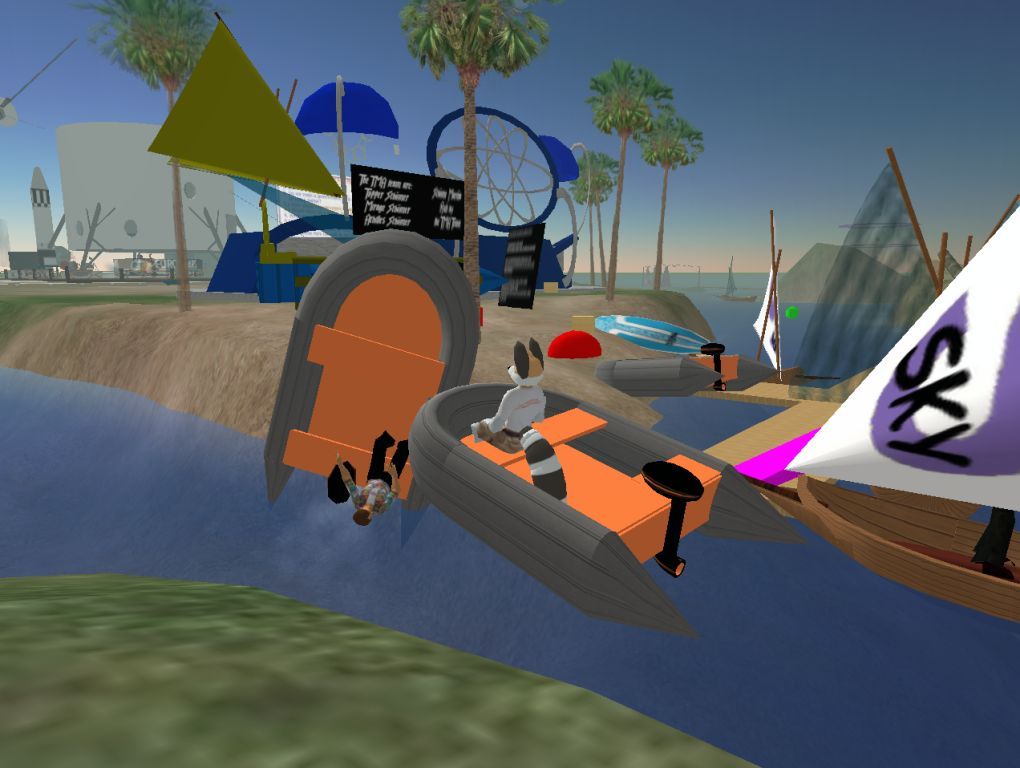 But we forgot to ask mark and faji to move the boats...

We arrved at the marina to continut the trials to find the boats in the way, we couldn't move them so we moved on to the next event sailing In this event a ten lap race took place around the archipalego, the SkyBase team had come along to the event with another boat of their creation, basically the same baot being used but with a skybase sail, the race went well but it seems a bit one sided and turned out that the script had been altered, the rule was techinally not broken due to not expilcatly mentioning anything about the scripting,however word was put round that the boat had to be the same, but as boats were meant to be the same so a re-run was ordered the next day

The sailing re-run took place, after changes to the rules, to keep the contest fair due to the small start line the contest was run in heats of 3 with the winner and runner up going to a final, all races were 5 laps heat 1 saw aston and liony qualify while heat 2 saw faz qualify (the runner up had to leave at that point) the final three raced to find the winner giving the results of

topper taceover The results were as follows

Being a saturday and short notice only wheelo could turn up at the time trials finish, having already had the best time, the event was canceled giving the positions

Overall the event was a general success though we had a few hitches I hope everyone else enjoyed it and hope you can come again to the next regatta when we have one.