Why hello there! I'm Wheelo, and it's high time I wrote something in my user space! 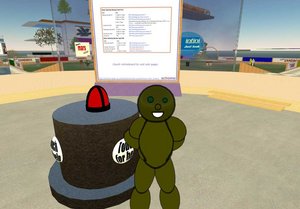 My appearance may change, due to my voice-activated colour changing suit.

More information on Wheelo corporation can be found below.

If you want to leave a comment or have something to discuss, feel free to use the discussion page.

I am an A-level student, and I am hoping to study medicine in the near future.

That means a lot of preparation. :(

In addition to gaining relevant work experience, I need to build up skills (specifically: teamwork, leadership, time management, communication, etc) - fortunately for me the SNP is the perfect opportunity for that!

Some great choices, I hope you're not thinking of Schome Park descending into Battle Royale territory ;-) -- Dan

Well with the appearance of popguns, dragonballs and swords, who knows... -- Wheelo

Loud music at that.

That's enough for now, let's not get carried away.

I must admit I am slightly more inclined towards cyberpunk books.

You really shouldn't do arithmetic with infinity. Using infinity, you can prove that 1=2... And hence you can prove this either way... (and besides, there's an infinite number of different infinities) --Decimus 10:10, 22 April 2007 (BST)

What have I been up to in Second Life?

I was a bit late off the mark due to other commitments. However the SNP sounds really interesting and I want to get involved more, fortunately for me the project has been extended!

Really useful page. Thanks for doing this. Fox

Plans for the future: