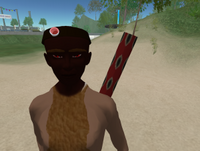 I am Professor Schomer, as you can see from the title of this page. I am a member of the Education Department and a regular of Schome Park and the forums.

I am currently working on a short film in SPii as part of the Machinima Group as scriptwriter.

Below is a bliki I add to from time to time...

And this is an article I wrote on Ostia Antica for the old Schome Park Archaeology section. 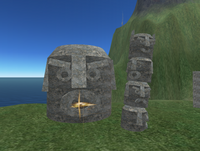 Senor Xtapolapocetl and friends, stone heads I made for the volcano in SPii

As an RL non-avatar I am most interested in sciences and languages (I speak two- French and German). I am studying the 'Science Full House' (Chem, Phys, Bio, Maths, Further Maths) at A Level.

The Professor is playing The Orange Box and not much else. But when the sublime Half Life 2, stunning Portal and superb Team Fortress 2 are in the same box, can you blame him? There is simply no excuse for not having played these games. Go and play them. Now! </free advertisement> 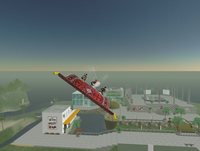 The Shark hitches a ride on board the carpet

The sheer random creativity (if it can be called that) in Schome Park is beginning to get to me. The craziest ideas and inventions come out of nowhere- just read the rest of this bliki for proof of that. Today's insane creation arose when I, perfectly reasonably materialised a shark (see below) on Dec's magic carpet. The ensuing shark-falling off carpet 'hilarity' led to the aforementioned fish being replaced by a a novelty over-sized bomb, and an attempt to keep it on board the carpet for as long as possible.

Thus was born a possible new Schome Sport. Joining the potential ranks of Volcano Sumo and Popball could well be "Trying to keep a bomb on board a magic carpet while flying" (snappier name pending). Hopefully a scipt could be added that let's the bomb know when it's dropped, or at least explode in a shower of temporary coloured prims when dropped. Hapno sat on the bomb, which promptly fell off in a Dr Strangelove-esque farce.

Trying-to-keep-a-bomb-on-board-a-magic-carpet-while-flying. You read it here first.

Didn't you say something like "It's a new definition of 'carpet bombing'"? We could call it that :p --Decimus

The Shark is replaced by a bomb 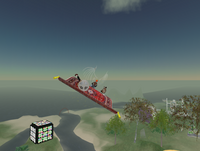 Earlier today saw a large ramp built, and many physical 'experiments' performed with balls and speedometers. One such 'experiment' saw Decimus creating a script that caused balls to materialise out of thin air, they were collected in a bowl shape prim and released en masse.

This led to Dec's making a coloured ball script, and then a ball pool, which caused much childlike excitement in me, Dec and Faz (OK, just in me!).

Here are some photos of this glorious moment in SPii history? 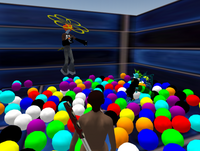 Frolicking in the ball pool. 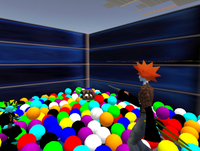 The rainbow bounty falls from he heavens. 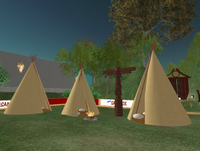 Following a random conversation with Hapno I decided to make a tipi. This 'naturally' led to me making a wooden totem pole and soon, enough an entire Native American village popped up in the sandbox. Feel free to take a look and sit down in a tipi. I'd also like to hear any thoughts you might have. 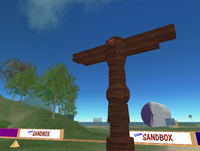 A close-up of the new Totem pole

In other news, Hapno's Catacombs are looking pretty grand, a nice gothic residence up in the sky. If you haven't already seen them I suggest you take a look. 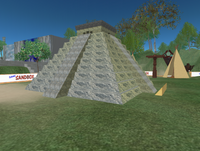 Update- In continuing the Native American theme that I've been toying with since Xtapolapocetl, I've made a minaiture reproduction of El Castille, the Mayan temple to Kukulcan (the Mayan name for the god better known by the Aztec name Quetzalcoatl) at Chichen Itza in Mexico.

Fantastic builds, Professor! would you fancy putting up some noticeboards in SPii explaining the builds so people can read about them inworld? --Mark Sparker 17:37, 4 July 2007 (BST)

I don't know exactly how to go about making in-world noticeboards, but I have made a wiki page with information on each. Hopefully this can be transferred to in-world displays (although I'll need a bit of help making them). - Professor Schomer 13:24, 9 July 2007 (BST) 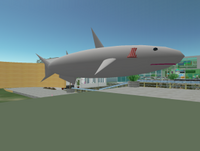 The Shark, in all its glory...

Today saw the dawn of Hapno's Creature Feature Script. It currently possesses a few 'Partron Suckers' (or whatever they're called), which bob around SPii, multiply and die. In an attempt to create a more familiar animal, me and Hapno crafted a rather splendid shark (not a tuna). The script was placed in it and.... 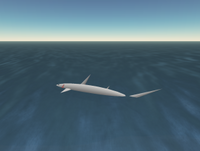 ...and later, in a state of considerably less glory

it died. That's the only way to describe it. It bobbed around, turned over and went belly up. Sleeping with the fishes. To no end of fish-based puns. So, that's that for a while.

Later on, a use for the volcano was found- sumo! The contestants stand on a round arena above the bubbling lava, and attempt to push each other into the drink. First in the lava loses. No objects or flying allowed.

As I type, the contest is continuing, with Dec, Faz, Hapno, Liony, Flio and myself competing for the title of Sumo Champion. Hapno even put on a little weight for the occasion.

Here's hoping this harmless fun (if you discount the burning hot lava pain subjected to the loser) becomes a regular feature of Schome... 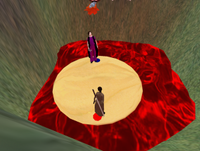 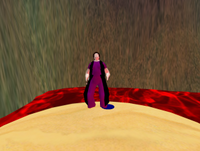 Hapno put on a little weight for the occasion...

There's an article about this on the main bliki, and if you hadn't known about it, then Hapno organised it at from 6pm. We started off at the gruesome murder scene (Wintermute's, by the way) looking for clues as to how he died. He was broken out of his jar by some instrument and left to die on the floor. We then scoured Schome Park for the murder weapon which was a hammer, found in the Japanese Garden of all places.

After the evidence was collected, the accusations began! This is where it got a little chaotic- no-one was safe from the finger of blame- not Mark, Elsa, Trix or even me. Eventually, (after Mark deleted the Arena we were using as a court, instead of the perfectly good one floating in the air above) it emerged that Hapno done the killin', or, as a dutiful robot, was perhaps lying for someone else. That's about as far as I got. 'Tune in' again on Sunday for the trial.

It was ironic, because with all the talk of the Three Laws of Robotics featured in the mystery, I-Robot (the film) was on Film 4 that very night. Strange.