If you want to talk to me, or answer my questions you can:

A bit about Me

I have been home educated for 9 years. I like being home educated because it is different to other children. It's nicer because you get to spend more time with your family. A lot of children I have told about home school think it's just dossing around playing all day, but it isn't, I have to do lots of work as well. I went to school for one year, whilst my brother did his GCSE's at home, so I do know a little bit about school as well. I liked school because I got lots of friends, but I didn't like school because they did all their work on worksheets, and we didn't ever do experiments, we just looked at the answers in a book. At home I get to do lots of experiments and you can go to groups and learn stuff together.

There are some things that I have to do every day like Kumon, reading aloud and piano practice, so I am not going to write about them, just the fun stuff I do. Some things I do regularly, like trampolining, swimming, piano lessons and cubs. I also go to a nature group every month.

I haven't always got time to do lots of writing, so I can only write a little bit. Then when I have got more time I can write more and fill in the bits I've only done little bits on. So keep checking back as it might change as I think of more things.

You can read some of my book reviews here

sorry i have not done much but i have had a new cat and scooter for my bithday. i went to london on a walk with my mum and dad we have got a book about london walks. im not a big fan of walking more of a biker person but i enjoyed it. we went to a realy good pub called cittie of yorke, it had a realy cool fireplace it was a triange. be back soon

I realy liked the dockland museum. One of the boats was only 11 meters long that is from the bow to the end 9 meters for the people It took 20 people it had 2 floors the second floor had 5 feet head room.here is a picture. 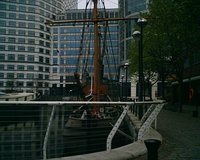 Here is a video of me driving our land rover through a ford on holiday in the lake district. I really love driving.

We couldn't get this to load on Wikiworks, so you have to go to Multiply to view it (I hope!) video

I went on holiday to the Lake District and there used to be a Gunpowder Factory where we stayed. On the Gunpowder Walk I took some pictures with the PDA of all the things that they used.

Lovely pics. I'm going to point people I know who complain about the poor quality of images taken with the PDA at this page because I think you've got some great shots. I've been going to the Lake District for about 16 years but never seen the gunpowder factory. Did you get to go up Honister mines - they're really fun? I say up because they're on the top of Honister Pass and the miners used to live in huts on the mountainside while they worked. Sometimes it was so windy, some of them would get blown off. They do a really exciting tour of the mine - if you're daring you can walk up the steep path to the entrance, if you're a little more cautious they'll take you up in a landrover. I walked and it was really worth it.


Loved the video too. Glad you circumnavigated Peter by hosting it elsewhere ;o) [

My mum woke me up this morning and said "look outside". I looked outside and there was loads of snow! I had a shower and got dressed and went outside with my cat, Roxy, who has never been in snow before. I went on my go-kart here is a picture of my tyres and all the snow they collected.

We went on a trip to the Space centre in Leicester. It was really really REALLY fun. I liked looking at all of the rockets and we did the astronaut training centre, which was very good. We went on a simulator rocket ride, crash landing on a moon where they were building a space station. The hardest task was driving the hover chair, you had a laser which you had to try and get into the middle of a target, but the targets kept changing and the chair was very hard to steer because it was anti-gravity (and I think it was a bit broken as well).

We also saw a film about being an astronaut and all the training they have to do.

If you want to take a break and travel to outer space, have a look at my travel brochure.

Click this link to see all the spy training pictures

It was much more scary for the mums watching below!

Who is the person up there on those ropes? Surely it isnt you? Would you be scared to go up so high? - Munchkin'

Some sad news: we put a net over our pond to catch all the leaves that fall in, and this morning when we went out we found a dead kingfisher caught in the netting.

I built this really cool spider's web in the garden. What do you think of it?

I found this fungus on an old tree stump, we are going to try and find out what it is.

Visit to the local Environmental Centre

We went to a local education centre to do some experiments on rocks and soils. We played with different types of soil to find out if they were clay or sandy. Then we did an experiment by putting a pipe into a pile of chalk, sand and clay. We measured how long it took some water to drain through the pipe to find out which soil drained best.

I really like going here because there is loads of interesting stuff to do.

here are some fish in my pond. it is quite hard to see the stickleback in this picture but if you look really closley you can see lots of them.thay are allso new in my pond we think that the birds picked up the eggs when they were fishing and then as they were flying over they have fallen in our pond.

Some interesting things in my garden

I found this leaf and my mum said they are the spores which burst open to spread the seeds. They feel really soft and furry.

These are some of the interesting things we found at our local nature reserve.

Here are some mushrooms we found, which look interesting.

I found some bullrushes near the pond, and we had a look at the seed heads. I snapped one open and blew the seeds out.

We tried to take pictures of the seeds blowing away, because they looked really pretty, but it was too difficult to get the picture.

We went to London to see a science show, with lots of explosions. We are going to do one of the experiments in our garden and will get a picture or maybe a video. 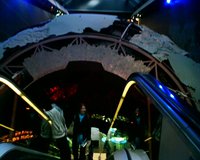 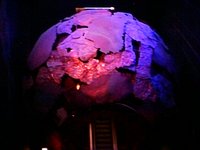 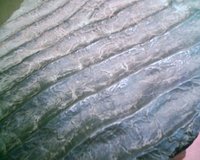 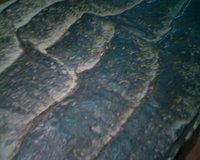 I took these pictures when we went to the Science Museum and Geology Museum. At the Science Museum we watched a film about volcanos earthquakes tornadoes and tsunamis. I thought it was really really interesting and would recommend it, it was called Forces of Nature. Afterwards we went to look at the big steam engines then we went to look at the materials gallery because they had an upside down car and I wanted to know what it was there for. We played on the simulator making shopping trolleys, jumpers and baths.

Then we went next door to the Geology Museum, where I took these pictures. I liked the big earth that you have to go up through, becasue I like space.

The pictures of the rocks show patterns made by the sea a long time ago when the rocks were being formed. 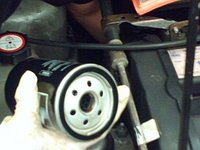 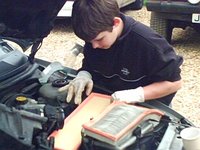 I am good at working on cars, my dad has taught me how to change an oil filter, the big black round thing in the picutre on the left, and the air filter. The picture on the right shows a clean and dirty air filter, can you tell which is which? I am also really good at driving, I wish I was old enough to drive on the road.

Here are some of the things I have done this week.

I went out with some other children to town on a rock walk. We walked around town looking at different types of rocks in the buildings and statues. I took lots of pictures on the pda. You can see the pictures and find out more about the rock walk.

I took this picture in the morning as we were going out. I thought it looked interesting. I wish I was a spider because the web is so beautiful, and strong and I would be able to do that. I am going to make a spiders web in my garden with some string. 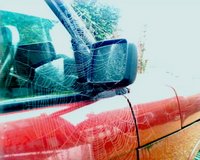 We went to town this afternoon to help out on a home ed information stall. I went to the department store on my own and bought some swimming goggles.

I also played on Armadillo Run. This is one of my favourite games you can download a demo from www.armadillorun.com please try it out and let me know what you think?

I did an experiment called dragons blood with a friend. We were trying to see what was in dragons blood so we tried smelling it, boiling it, freezing it and sieving it, we used some blue crystals to find out if it had water in it. 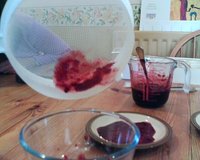 Mum and me were trying to get the GPS onto the PDA, in the end Peter helped us and now it works. When I went to cubs I used it, and it got the route perfectly. Cubs was really fun because we did map reading and a fitness challenge. I've got to do lots of exercise in 1 minute over the next 2 weeks to see if I can get any better. At the end of cubs I got made into a sixer, which I am really proud of.

I got my Hornby train back from the repair shop. The man said it was a bargain, I bought it at a boot sale for £10 and it is excellent and worth at least £50. For the rest of the day I helped my dad in the garden, he let me light the chimenea to keep us warm. I also played with my new clarinet, I have got a lot better already.