I'm trying to input text via my PDA. However, the wikI only displays three characters at a time while in Edit mode, which makes this virtually impossible to do. Any chance of optimising the wikI for PDA users?

I don't think that it is possible to optimise WikiWorks to work in a PDA - however, if you set your PDA to One Column that may help solve the problem.

Actually, I think there is a template somewhere for displaying in PDA-friendly format. I've seen it on the Handheldlearning forum which uses the same software. I'm currently trying to track it down, but no luck so far.

A crisply cold and sunny afternoon with lots of long shadows. 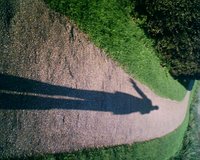 I sent out in cheerful spirits to meet the local wildlife 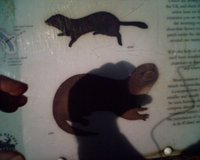 The PDA pinged in all the right places. I enjoyed the guided tour aspect-sought but failed to find the dodders (parasitic on nettles. Found the nettles though). For some reason I liked the ancient Hay Meadow part very much. I’ve never noticed it before and the commentary was very enlightening. 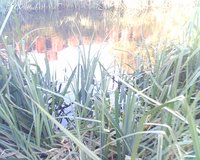 Bird-wise, lots to be seen today: Saw a heron, some swans, some teal, mallard, crow and magpies. The majority had flown off by the time the camera clicked. The heron and swan stood still for me, appearing as tiny dots. Can you see them? You have to screw up your eyes and really believe. This was the high zoom version. 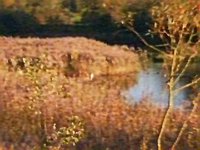 Where were all the mushrooms that the others saw? I had a good poke about looking for the custard and plums. Excellent name. Found two large red and white mushrooms which weren't on the commentary. 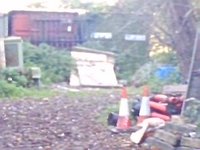 The arrow guided me safely back to the mulberry lawn, where I had a celebratory coffee. Apart from the camera the PDA really added to the walk. I have done this before and found out lots more this way, and it was fun too. Either the camera needs to be replaced with a faster version or we need to release very large, but very very slow,birds onto the nature trail.

Hilary and I went for a walk around the OU nature trail - with the 'help' of the software on an IPAQ (PDA). This account does two things - it presents some images of things we noticed and then describes what it was like using the PDA to 'help' us on the trail.

We noticed three lots of fungi (what I'd call mushrooms) on the Mulberry lawn: 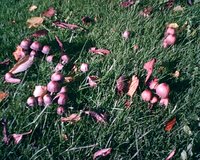 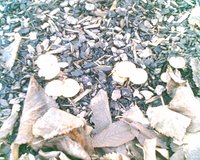 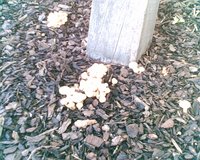 We've no idea what they were, so any suggestions would be most welcome (if you can make them out in my rubbish photos!).

We then found our way to the pond - not easy given the building works on the now demolished Jenny Lee building. No sign of oil film on the water this time. Then off went to the Church, where we discovered that the lack of diversity of lichens on the tombstones is an indicator of pollution. I took a photo of a tree, so we could try to identify it later, but as you can see my photographic skills are severely lacking (and/or it is rubbish camera) 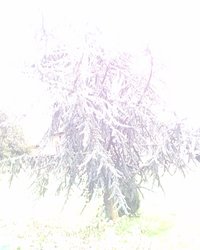 Then over the bridge - no fish to be seen, water running very fast and quite dirty - and on past the haymeadow.

When we got to Walton Lake we wandered down the wooden walkway that runs out across the lake, and saw a couple of dragonflies - even managing to take a picture of one (which is a miracle cos the camera on the PDA is soooo slooooow 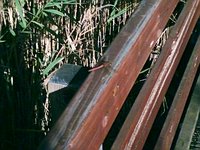 There was someone in the hide reading a book, so we made a hasty retreat (being quiet is not one of my more well-known skills), but I took a photo of the hide: 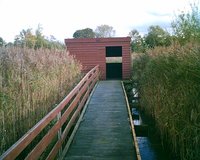 Then we wandered along the island that runs down the middle of Walton Lake. We saw lots and lots of other fungi: 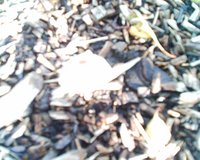 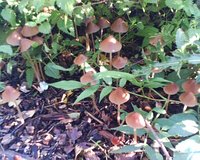 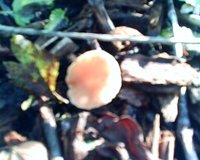 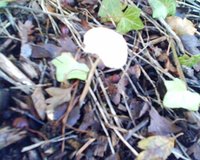 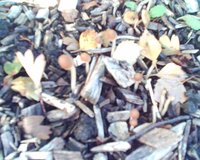 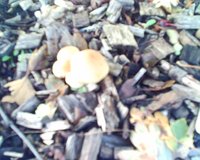 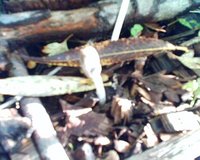 Again my photographic skills are in evidence - if you know what these fungi are then why not add their names under the pictures?

We then completed the walk, or a walk at least, cos by this point the PDA had got completely confused (see our reflections below). Lovely it was too.

Reflections on using the PDA

We started out on the Mulberry Lawn, as instructed by the PDA. Must admit it was a struggle to see the screen cos it was quite sunny. When I wanted to take photos of the fungi I couldn't get the camera to work by using the button on the PDA (cos that zoomed us in on the photo on the nature trail software) - so I closed down the nature trail software (CAERUS) and opened the camera. That was a pain to be honest - and as you will see caused problems later on. Hilary got agitated waiting for me to take the first photo, but then found two more different type of fungi which I also took pictures of. I then loaded up CAERUS again and tried to find the way to the pond - which was a problem cos the software didn't know about the building work - luckily I knew where the pond was so we made it there OK. We then tried to work out where to go next, I couldn't tell from the arial photo, but it did say to go to the church and again I knew where that was. As we approached the Church the PDA started talking to us, which was interesting (and unexpected as I'd failed to get it to talk to us on the Mulberry Lawn even though there appeared to be info there that we could have heard). Again I struggled with the camera - Hilary got frustrated waiting for me again. I still couldn't make out from the PDA where to go next, but guessed that we were meant to head over the river. This was confirmed by the PDA suddenly starting to tell us about the river as we approached it. We both really enjoyed these audio bits, though they often started too soon or too late (before we got the place we were being told about, or after we had passed it). Again we guessed where to go next - by this point the software was very confused, it kept telling us we should be going to the Mulberry Lawn and pointing in that direction. However, we used guesswork and the location of 'information' on the screen to help us work out where to go next.

The walk continued in this vein - switching between the CAERUS software and the camera - the software getting upset (with the text along the top often being hidded by a white bar - and it continually telling us we should go the the Mulberry Lawn next). The camera seemed to go slower and slower, which I put down to a shortage of memory. Hilary got more and more impatient with me stopping all the time to try to get the camera or CAERUS to work. Eventually we just left CAERUS running (no more photos) and every now and then it would tell us about something we were approaching.

We decided that using the PDA had been a bit of a distraction - I spent most of my time playing with the PDA and not much looking at the things around me (except when Hilary pointed out somethign that I took a picture of). Hilary decided that the PDA had the advantage of slowing me down - "at least I'm not 10 paces behind you always trying to catch up". And to be honest I suspect that the PDA caused us to focus more closely on the fungi - we were trying to find ones that we had not photographed already, so were comparing and contrasting the ones we had seen - something I suspect we wouldn't have done otherwise.

However, the PDA was also a major distraction - if the software worked better, the screen could be seen in sunlight and the camera was better integrated with the software then it would be much better.

Hints and Tips on using PDA, Caerus and Camera

Swapping between Camera and Caerus

To swap between camera and Caerus, press the Windows button (bottom of the thumbpad) and select HP Photosmart Camera from the drop-down meny that appears on the screen. This will start the camera application whilst leaving Caerus running in the background.

To swap back to Caerus, tap the X on the camera window to close the Camera app. Caerus will reappear with your current position still correct

If you close Caerus, then when you restart it, it will assume you are beginning the tour over again and direct you to the Mulberry lawn.

Skipping to next or previous tour point in Caerus

If you press the rocker button in, this will zoom in on the arial map. It can be difficult to zoom out to precisely the correct position as there seems to be a bit of a reponse delay which can lead you to press too often.

Gill gave us a briefing today on what she wants us to do - playing with the PDAs which are equipped with a program (CAERUS) that will navigate us around the OU Nature Trail, giving us relevant info about it at certain points.

Gill took two groups of home educators (parents and children) around the OU Nature Trail today - as part of a workshop we were running. She has posted some of the photos that were taken on a flickr page.

20th September 06 - Other images from the Nature Trail

The weather was fine and sunny. I saw dragonflies which were too small and fast for me to photograph. Here are some images of things that didn't move and that I could therefore photograph 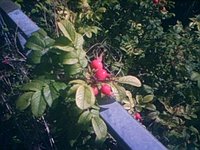 This picture was taken of the railings that run alongside the concrete culvert. There were lots of interesting plants there. 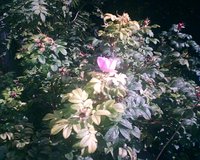 Is this a rosa rugosa? Again, taken by the culvert. 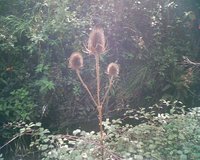 I thought these Teasels looked really lovely in the sunshine. I also saw a program on TV which described how teasels are still used up in Scotland to raise the soft nap on cashmere (I think). They put them in large rollers especially made for the purpose and then an automated process pulls the cloth through and creates that lovely soft finish. Apparently there is no man-made substitute that would work as well.

I did a quick Google search and found a link to Locharron of Scotland:

which includes a photo of the teasels used for cashmere finishing (towards the bottom of the page).

As I walked past the pond on 20th September it was so lovely and hot and sunny soI took this photo (no newts seen). 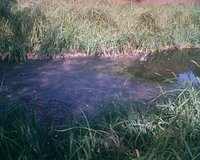 Notice the oily slick floating on the surface. I didn’t spot that at the time. Didn’t see any newts either.

I went on the nature trail with a group of home educated children and their parents on 22nd September 2006. It was pouring with rain and we all got soaked (although the PDAs survived both the rain and the children). The kids spotted oil on the surface of the pond and were very concerned about its effect on any newts. One of the kids said that the oil had a silvery sheen which meant that it must have come from the Jenny Lee demolition works. Here’s the photo. Has anybody else seen this and is it likely to be a risk to the newts or is it just a natural occurrence due to soil or other naturally occurring environmental factors? 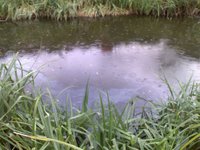 Walked the trail again today (17th Oct, 2006) and took another pic of the pond. The water was clear as crystal with no sign of oil 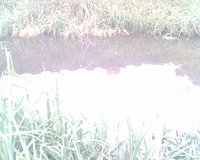