This page was created by Faz Schomer 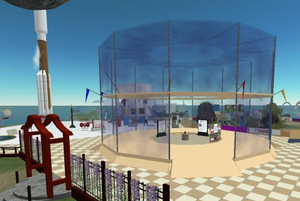 With the prospects of an island redesign, Faz and Mars are looking into reviving the original Scho-op from the schome NAGTY pilot. The changes that would be made are that second steps would inhabit the second floor - complete with the features from the start and end of phase 2 that you loved, and shiny new ones - and the building would be brought up to date to cope with the extra needs of new SParkers in the third phase of the project, will these plans go ahead? Only time will tell.

With the incoming arival of SP3 Second Steps is getting ready for a brand new phase with wiki upgrades. That's right, along with the appearance of the new logo Second Steps is having a complete wiki page upgrade as well as taking on the Tutorials page. When phase 3 is underway we are going to completely redo all the tutorials to bring them right up to date, expect several new ones too!

Control panels are soon to be installed in the Scho-op/Second Steps allowing avatars to select scho-op items from catagories. These panels will be placed in the centre of the left wall of the building.

Creative? Like building? Then this is for you. The Scho-op/Second Steps sculpture competition gives you a chance to build a sculpture that will be part of Schome Park II's highstreet forever. Create a scholympia themed sculpture to go next to The scho-op/Second Steps building. Leave a space for a reasonable sized plaque and we will create a texture saying "created by Your name here Schomer/SParker". We suggest you use the Granite texture under 'rocks' in the library. Good luck!

After several weeks of discussion on the Schome community forum, residents of Schome Park II decided that Second Steps and The Scho-op should join forces. A poll was held to decide on the design of the Scho-op/Second Steps building. Faz Schomer's design 7.5 (see above ↑) was chosen with Explo Schomer's design 3.0 coming a close second place. The new Second Steps is in the same riverside location in the Schome Park II highstreet as before, right next to Achilles' newly built starting place for newbies and scholympia.

The future of the Second Steps group has not yet been decided but we think it should carry on helping SParkers in need. The group was set up at the start of Schome Park II and has been used by those interested in helping avatars in Schome Park out. The original plan was to use the Second Steps help button to call these avatars if pressed, but for some reason the faulty help button script was never fixed.

What are Second Steps and the Scho-op?

Sign up here to be part of the Second Steps group!