For more details, check out the Calendar at [1] 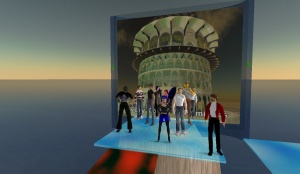 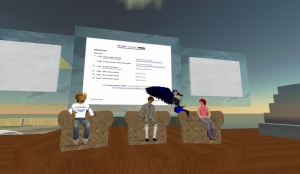 Members of the team planning the migration to Schome Park met in-world at 10:00am GMT. They toured SchomeBase and discussed issues relating to the migration to schome park. Peter chaired the meeting and started out testing the group's ability to control their avatar by walking along the no-fly walkway to the photo booth. Eventually, after a few drop-offs, we all congregated for a group photo: 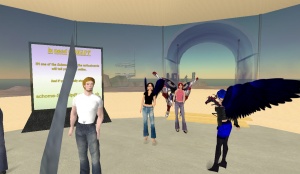 The latest fashion in wings 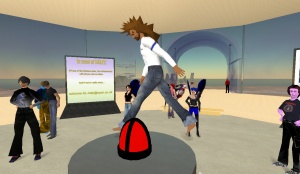 We then toured other parts of the island, dropping in on the arena where Schomer, Woop and Euphloozie bagged the comfy armchairs. Not to be left out, Fox perched on the arm of Euph's chair whilst the rest of the group sat in on the benches.

A quick whistle-stop tour of the archipelago saw us jetting over to the meeting place for a final briefing conducted by Peter from an active stance, running atop a podium. We completed in an hour, towards the end of which Elsa arrived sporting a splendid set of wings. Not to be outdone, Euphloozie donned hers and the meeting ended in flamboyant style.


The meeting was attended by: 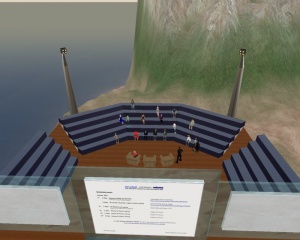 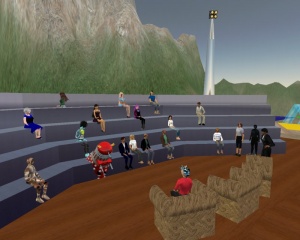 Members of the UK Educators group met on Schomebase to further discuss the recent Eduserv call for bids. Art Fossett from Eduserv was there to introduce the bid, and then to answer questions from interested parties.

It was also the first event held on Schomebase that welcomed visitors from outside the Schome/OU group. The island peaked at 24 visitors, a decent tally for an island still in infancy.

Again the tone was one of enthusiasm, although the questioning was tough for poor Art who felt like he was being interviewed. It was good to see another good turnout from the OU. A full transcript of the meeting can again be found on the simteach wiki. There is also an entry in the SchomeBase bliki and it's also made it on to Flickr http://www.flickr.com/photos/cubistscarborough/345458021/ and Snapzilla http://www.sluniverse.com/pics/pic.aspx?id=128095&sort=Pictures.PictureID+desc&Name=asher+Hebert

The Second Life Planetarium at Spaceport Alpha was proud to premiere seven new shows. The inaugural viewings were hosted by their authors, students in Chaac Amarula's Introduction to Astronomy class.
See this blogger's opinion of a Space Museum presentation [2]

Elsa Dickens bravely stepped into the limelight to run a strategy game in the Schomebase Plaza. Two teams of two participated in what was a "Prisoner's Dilemma"-style game of negotiation, collaboration and treachery.

Aside from the fun of playing the game itself, the time was hugely valuable in discovering the strengths and weaknesses of such activities in SL. Moving objects around within time constraints was not easy at all, and a modified game board of a more automated kind would help the game enormously.

The ability to have private IM discussions within our teams whilst standing (virtually) next to each other is a huge strength of this kind of medium. Something which cannot be achieved with both teams sitting round a (real-world) table.

Interesting Elsa pointed out at the end that the teams were oblivious to discussing tactics openly from round 1, when they could have chosen to work together. Instead both teams sat behind their metaphorical fences and made decisions independently. 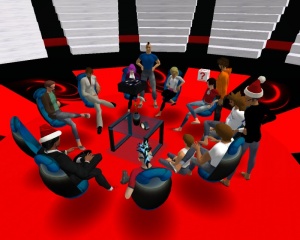 Members of the UK Educators group met on Audio sim to discuss the recent Eduserv call for bids. Discussions were somewhat cautious, but regardless the tone was one of enthusiasm for the potential of SL. There were also a number of people known to be interested who could not attand.

It was agreed to meet again on Schomebase on January 4th 2007, 2:30pm, at which time it is hoped a member of Eduserv will be in attendance to field questions.

More information on the group and this meeting, including a list of attendees and full transcript can be found at http://www.simteach.com/wiki/index.php?title=UK_Educators.

A virtual meeting was held on SchomeBase on Monday December 18th. See the transcript of (most) of the event here. It is not complete as I was late getting there and slow getting around because of lag problems. A satellite in winter is a big problem for SL I am discovering. ADSL is apparently available soon so fingers crossed. Guess its an issue to be aware of for Schome - home educators in rural areas may also be connecting with satellite and may face similar problems. --Jacquie 17:58, 19 December 2006 (GMT)

Members of the OU and Schome groups gathered for a tour of Spaceport Alpha. A full report can be viewed here.

Is a talk on Second Life, for the EATING group. Jacquie will be the speaker and she will be talking about about the Second Life Cetlment island purchased by COLMSCT. This talk is part of the regular EATING group series. Find out about other meetings by checking out http://ict.open.ac.uk/eating/meetings.html

Members of the eLC (and anyone else who is interested in Second Life) are meeting in the Digilab for a tour and some hands on play led by Jacquie Bennett of the COLMST CETL who has a lot of experience with this environment. Also on hand to talk about Second Life will be Peter Twining (FELS) who is has a project which involves looking at using Second Life with the National Association of Gifted and Talented Youth (NAGTY). This event will be useful for anyone who wants to talk to some experienced users and play around with others from the OU. It is the first of the eLCs monthly meetings in the Digilab.

An inaugural meeting of the "Open University UK" group in Second Life was held in-world on Thursday 7th December at 9.00pm UK time.
For a report of the meeting, see this report.