This page looks at Second Life's orientation process in some detail so that we can consider where schome is doing it better and where we could improve.

When you first arrive on Orientation Island you see this sign. You're in Second Life, you're on Orientation Island and you have to head in the direction of the arrow. If you don't speak English, the arrow and the logo give you all the information. If you speak a little English you only have to read 'This way out', and you have the arrow as a clue. To stop you making mistakes, there is a rope fence in the way of the wrong routes, and stepping stones leading you in the right direction. The text is clear and the branding is obvious.

Changing the way you look

The first thing you learn to do is to edit your appearance. Again, there is very clear signposting and branding. If you don't speak English the big mirrors give you the clues. In all these locations, the mass of text is on a notecard which you obtain by clicking the revolving Second Life logo. Notecards are a lot easier to read than posters - even when you've mastered the camera controls, posters take a bit of thought. Notecards are legible and you can keep them. If you speak little English you can copy the text and go and puzzle it out together with a friend or dictionary.
I think maybe the man / woman images encourage you to go for a humanoid avatar. Other virtual reality environments might suggest more flexibility.
As far as I know, we haven't yet added a section about appearance to Schomebase. Perhaps we should add this early on?

I didn't get the hang of this the first time I did it. Took one look, tried out the zoom control, didn't really bother. When I looked again, the clever thing is that once you've zoomed, it asks you to read the back of the notice. I walked round to read the back and it told me I was cheating, I had to read the back while standing at the front. This got me using the vision controls in a whole new way, which I hadn't really grasped before, even though I'd spent six weeks in SecondLife.
The Schomebase skills section does require you to use the camera controls, but not to do that flipping round to see the back of something. Perhaps we need to add something in which covers that.
It's also worth noticing that, between editing appearance and using vision controls, there's a bridge. There are ropes on either side, it's wide but not too difficult, but it does get you thinking about how you move. 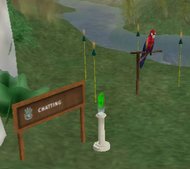 It's easy to chat to the parrot. I wasn't paying a lot of attention here, but I think the parrot just repeated your own words back to you. I definitely watched someone speaking Italian to it, and it responded in Italian. All of Orientation Island is set up so you don't need good language skills or good reading skills. It's remarkably good at conveying a lot of information without a lot of text.
On Schomebase, the mentors will be playing the role of encouraging people to talk. I think an advantage of the parrot is that it's obviously a program, not a person, so you don't have any fear of messing things up or looking stupid.
Another clever thing about Orientation Island is that it gradually introduces elements of what the environment can do: you can click to get note cards, objects can respond to you, there are animations running in the background. You've only walked down one hill, but you know a lot more about what's going on in SecondLife.

Put the ball on the table

Move the ball and put it on the table. The first time I visited here, someone had wedged the ball under the table. A number of people came past and tried to move it, but without success. This time it was more responsive. If I moved the ball off the platform it vanished, and reappeared at the start. The notecard here explains how to move the object and to raise and lower it. I realised that I'd been doing the wrong thing on Schomebase the previous day, when I'd been editing the missing piece of bridge instead of moving it. Just goes to show that some explanation is useful.

You can't leave Orientation Island without flying. Mot only do you have to fly across the ravine, you also have to land under a roof, so you need to practice moving up and down in the air, and judging perspective so you don't keep banging your head. On Schomebase we don't have a section on learning to fly. What's more, you can't fly in our skills area (well, at least in the first bit). We may need to rethink this as flying is such a fun skill and, if your keyboard doesn't have page up / page down keys, it's quite hard to get the hang of. 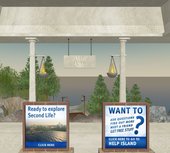 The boards teleport you to Help island or to the main grid. Even if our visitors don't leave our island, they will find teleporting useful. Should we add teleporting to the skills to be developed in our Skills Area?
In general, I would say Second Life has done a good job on this island. It's clear and you can take it at your own pace. You don't have to interact with anyone, you can take as long as you like about things. I also like the clarity of the design, and the way that the final teleport station has the classical architecture of the Help Island to which it takes you. And I like the landscaping. I'd like to get some plant life onto Schome Park ASAP. Could we put a selection of trees somewhere easily accessible and ask visitors to copy and plant a tree in our forest area (for example, on the side of the mountain where we're not likely to want to build)? That way visitors have an immediate input into how the environment looks and feels and, I hope, get some sense of ownership.

I'm not sure that Second Life has got Help Island right yet. It seems too big, even though it is clearly signposted and laid out. There's a sense that you want to get through it and move on. And why can't you go back to it? Also, in some places, most notably the tutorials section, they are struggling to convey a lot of information and end up with interminable panels to read and take on board. They obviously took a lot of effort to create, but how many people have time to read them at this stage, when they're keen to explore the world?

Help Island is divided into five zones. You can access them from a central walkway, walk or fly round the island or teleport between them. 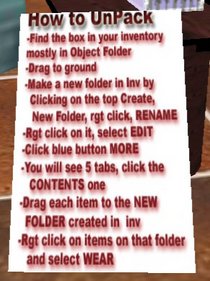 We were thinking about how to lay out our freebies store. This is how they do it on Help Island. It's pretty clear and you can see what you are getting. On the other hand, you do know that everyone else in SecondLife will have that dragon avatar or that house. On the other side of the island, there's a tutorial on how to manage inventory, which might have been better over in this area. And this advice sheet from a mainland freebie store might also come in handy.

When the time comes to move on from Help Island, you can collect useful pointers to Freebie Stores and useful tutorials, so you know which way to head when you leave.
On Schomebase we have pictures of places we have found interesting or helpful, for example Spaceport Alpha, Svarga and the Ivory Tower of Building Primitives. Will these places be accessible to our visitors, in which case we could provide teleport links. If they're not accessible, can we publicise other, accessible sites which we know through our contacts on the Teen Grid?