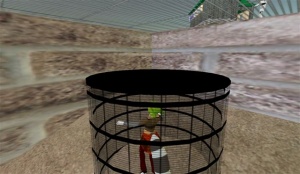 Stuck in a cage

A place for people to record the sorts of things you can go do when in Second Life.


As we explore the space, we come across objects that say "sit on" and other potential experiences in this virtual world. Do they have educational potential, or do they simply act as distractions?


Cages Some people wander around throwing cages around other avatars. Should this happen to you, just teleport somewhere else and come back again.

My impression is that nobody can tell who's 'throwing' the cages - I was chatting with somebody the other day and cages appeared around a load of people including us, then somebody accused my friend of throwing the cages - I am sure she didn't - and there was a half hour period while people worked out who did it and my friend had to clear their name. I was suprised that it doesn't seem easy to sort that out --Mgaved 12:50, 8 December 2006 (GMT) 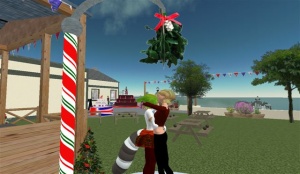 Kissing under the mistletoe

Pub games Gill and Marie decided to explore the Beer Garden together. The mistletoe gave predictable results. After their amorous encounter, Gill and Marie try arm wrestling in the pub. Methinks Marie pushed Gill's avatar through the table.


Dancing is a popular activity in Second Life, with plenty of lively nightspots. Many will even pay you to dance! Boogie Nights is on Arcata, if you want to make some money.


Being juggled The variety of things to do in Second Life is nothing if not diverse. How about sitting on a flaming ball and being juggled by a giant pink elephant?


Emoting Some times people go over the top to show you their emotions.

Weirdest of all I landed on a fairly empty sim one night. Just two or three shops, a road and not much else. There only appeared to be one other avatar on the island. He was mopping his shop.