let's get on with it

This is a design by Baso for a build that will serve as a Scho-Op. The chest of drawers acts as a store for items and clicking on a drawer would activate a list of associated items which can be bought as a whole. He is building it in-world but will take it into his inventory when it is finished. Apart from that, I believe the image speaks for itself. 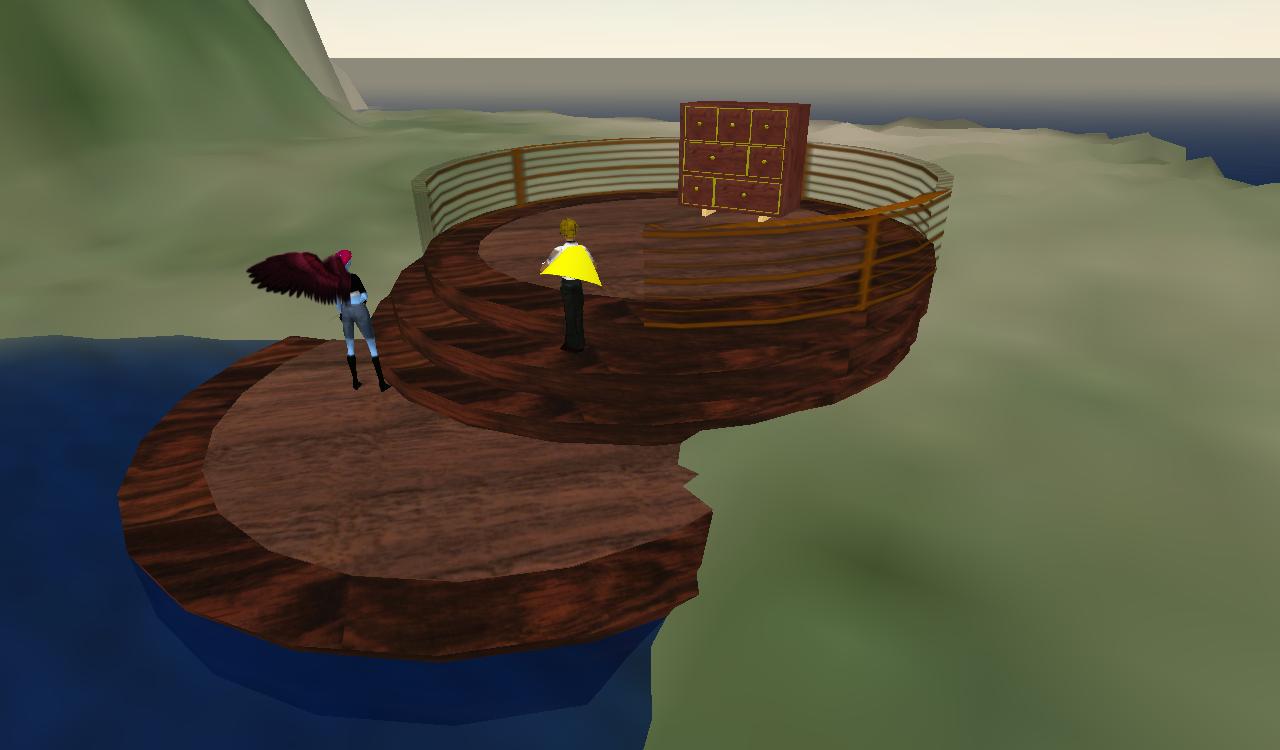 Okay, this is the concept for an open plan Scho-Op/Second Steps. Importantly, this is not a full design, it is merely an idea of the style. A full design would be best done in-world as there is chance for experimentation but hopefully this is sufficient to see if you like the style. The idea involves a central area (shown in the second picture), perhaps a teleport, with a control panel either side. Currently these are planned to be one for getting items, and one for tutorials/maps etc. The area is surrounded with pillars, though this is part of the design that is most uncertain. There is a sculpture, preferably more than one, in the area, and lots of trees, stones and waterfalls are planned as well as this, though drawing them on blender would be nigh on impossible. The disk on the ground is the rezzing area for the map and tutorials, the items to be given out would appear above and around the relevant control panel, the notices are displayed on the flat rectangle near one corner, and the online/offline boards are in the corner next to it. These are shown in the third picture. The perspective is terrible and there is no floor, so apologies for this. Please give your feedback here. 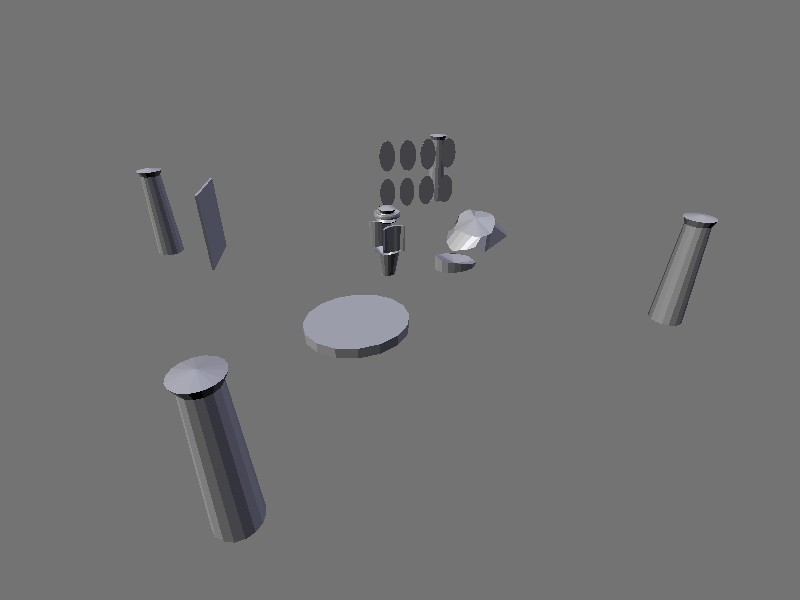 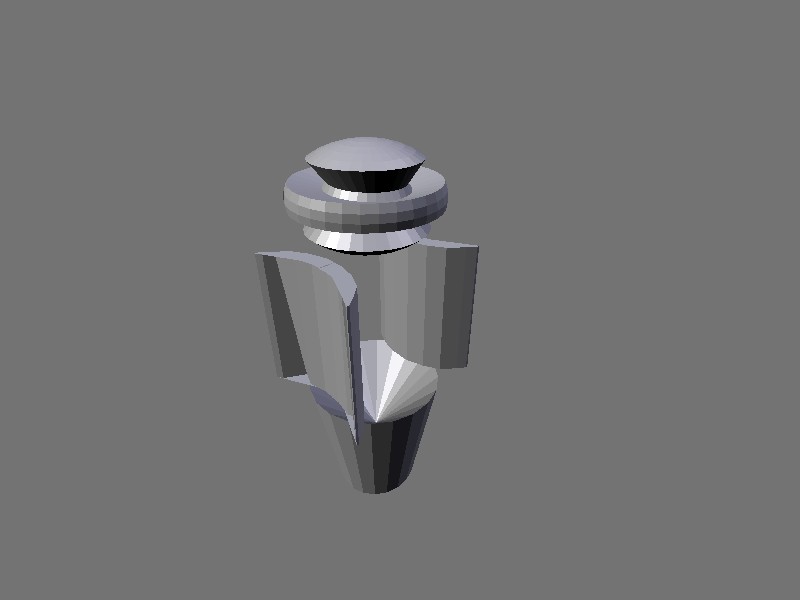 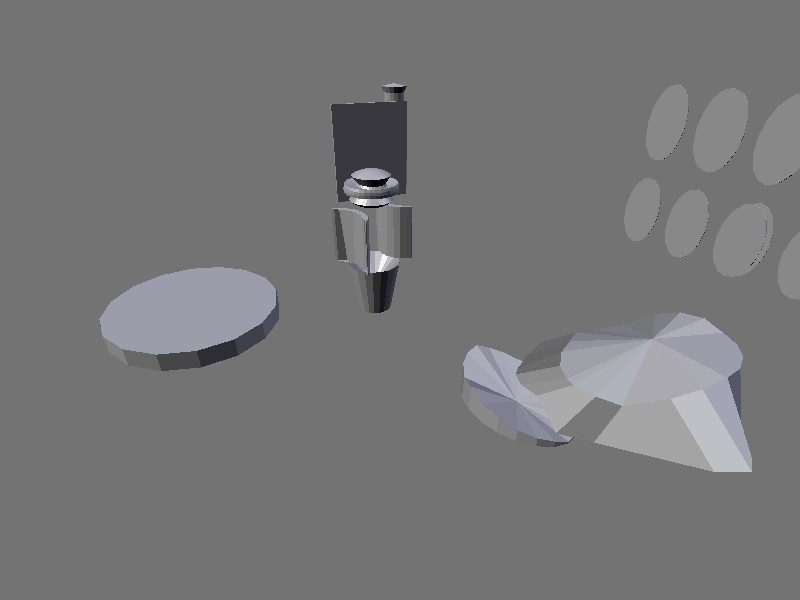 This is the enclosed variation to design 3, in accordance to feedback received. Everything applies as above, except there should be more semblance of order as a floor has been added along with walls and a roof. The walls are somewhat boring at present so any suggestions would be much appreciated. The roof is supposed to be smooth in the billowing pattern that should be visible (especially at the front), but looks very jerky at the moment. Please give feedback in the same place as before. 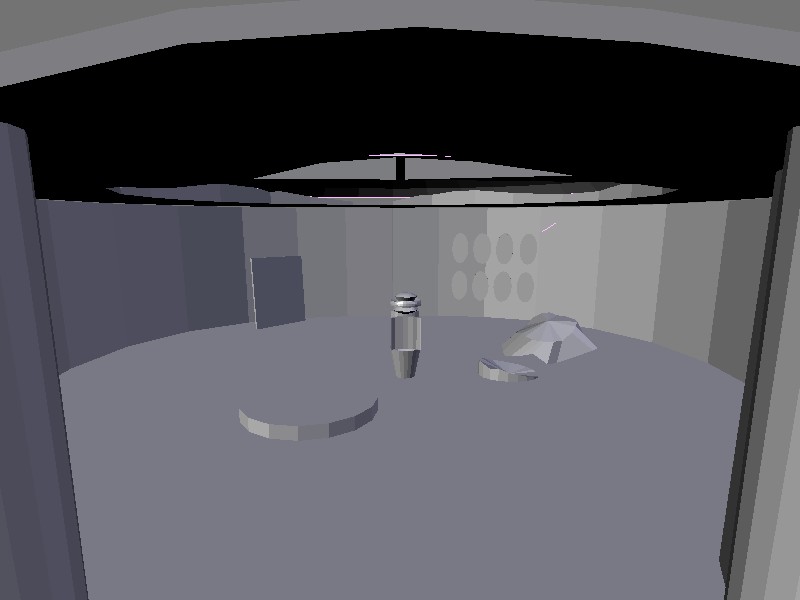 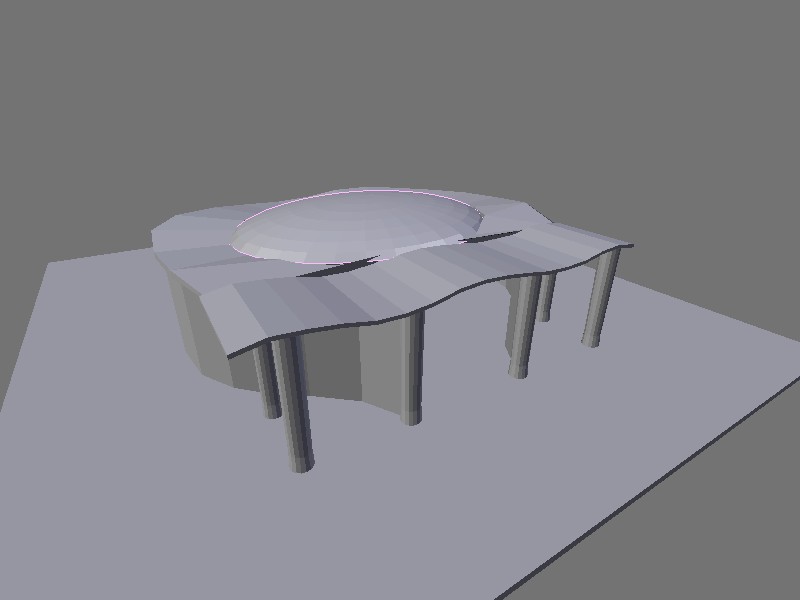 This is the open variation to design 3, in accordance to feedback received. Everything applies as above, except there should be more semblance of order as a floor has been added and objects are more neatly arranged. The grey surfaces do not do justice to the design, as the idea would be to have water pavements and plants growing all around the lower level of floor. The flat panel at the back is supposed to be oriented so as to give a wonderful view of the SPii landscape-there would be no prim in the design once built unless a suitable view cannot be found and a picture would have to be used instead. Please give feedback in the same place as before. 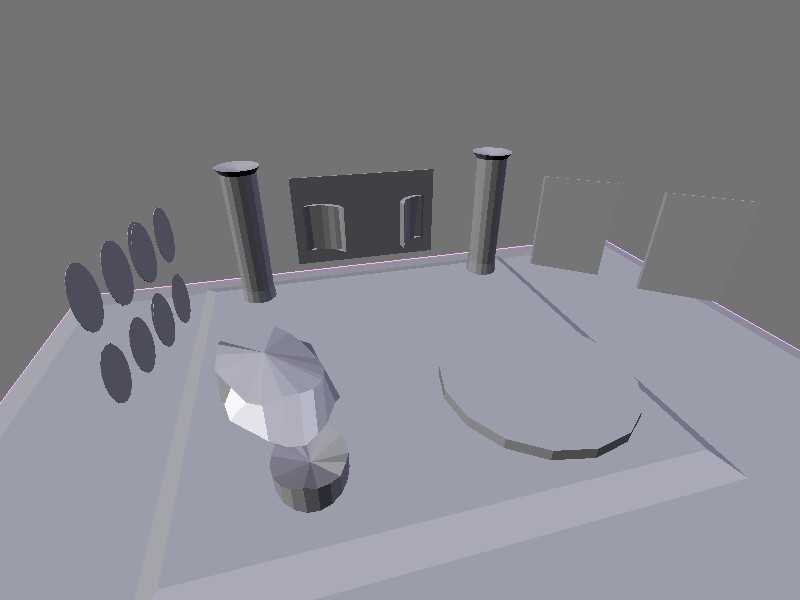 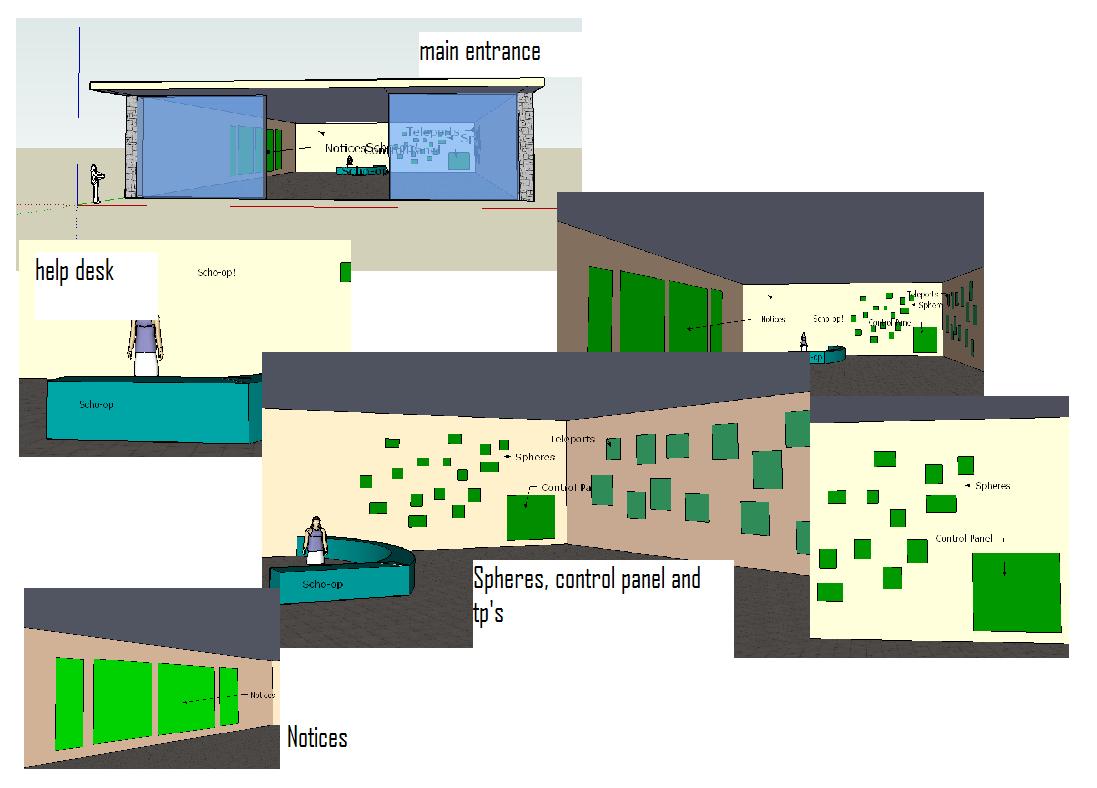 Item 1- location away from schomoplyus

heres a very quick idea for non roman idea could be put away so it doesn't look out of place. 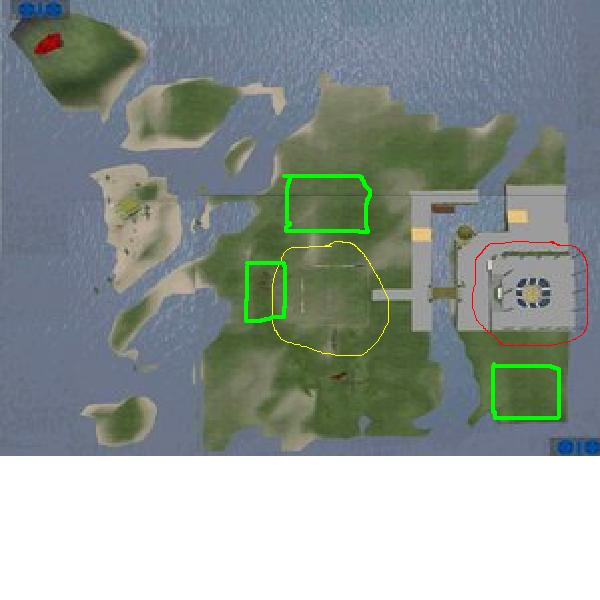 My idea (Explo) is to have, rather than a full building, a control panel, probably with some decor around it. Please feel free to make suggestions either here or on the forum-personally I think that the struts need a wider base and the screen could do with setting back. I apologise for the textures-it was made on ProDesktop which isn't particularly good for display purposes. 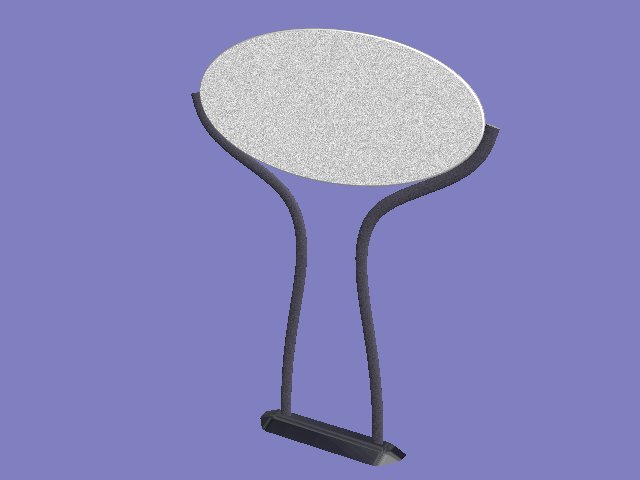 What is this?----It would help if you read above, but never mind. The point is not to have a building devoted to a shop. Instead, a control panel is the only physical protusion of the shop script. Using it, you would select the type of object you want, following down the grouping categories to get the specific object(s) that you want. This is my design for the control panel, suggested changes would be much appreciated as it does not exactly look good at the moment. It would preferably be surrounded by fitting decor, sculpture or similar. You must understand that the main proposal is not for this specific design, but for the control panel idea.--Explo Schomer 20:13, 28 May 2007 (BST) 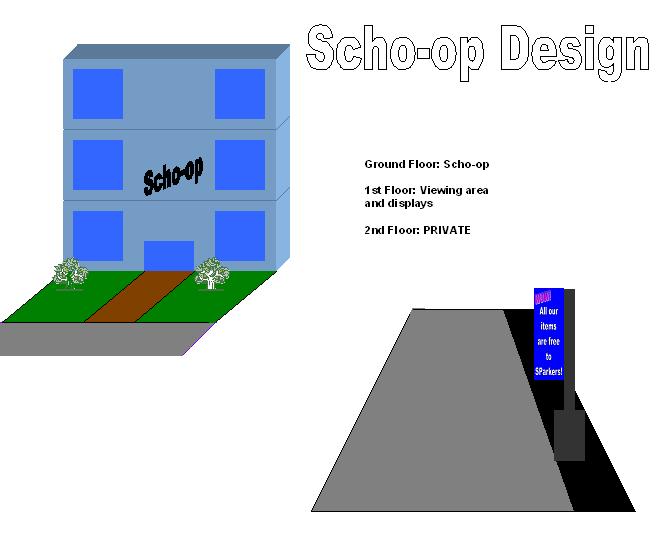 The bottom floor will be the scho-op, the first will be a new viewing platform, overlooking the whole island, and the top floor will be private. The inside will look modern, with teleports, notices, a big fish tank in the middle and the objects will be given out by related things, ie boats given by a boat etc. The new Scho-op script being made by the government will allow people to choose, out of the boat category, which one they want. 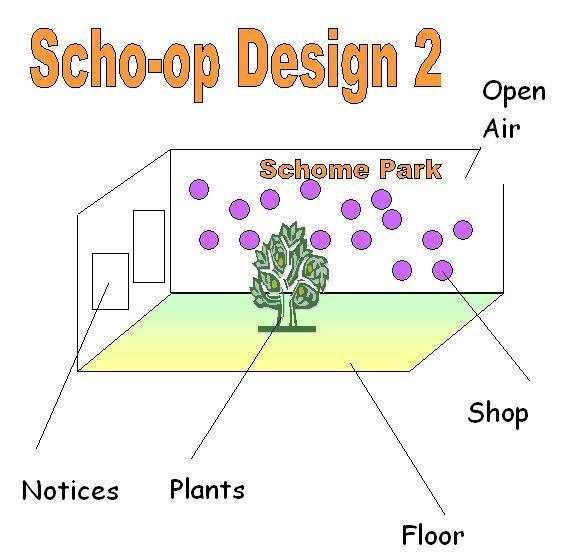