This mini case study reflects on one of the many 'volunteer staff' within the Schome Park Programme - Amba SParker. As such it is intended both as an acknowledgement of the vital role that volunteer staff play - and perhaps along the way it will stimulate some thinking about the Schome Park Community more generally.

Amba first became involved in the Schome initiative because she was interested in issues surrounding the education of young people. As someone who was actively involved with local schools and youth groups, she could see the potential offered by schome, and wanted to find out more.

She spent many long hours reading the wiki and the public areas of the forum and had a good understanding of the Schome initiative long before making any contact. She also looked in-world on the main grid and found out more about the Schome Park Programme (SPP) from the information and resources available on SchomeBase at the time.

It soon became apparent that Amba was pretty well informed about the use of technology to support learning, and already had considerable experience of Second Life™ virtual world. In about July 2007 we started the process of getting clearance for her to join the SPP, and during this time Amba started to experiment with some of her ideas on SchomeBase. She clearly had a lot of fun building fountains, lakes, underground caverns, giant flowers, a merry-go-round, and generally using the area informally as a meeting and discussion space with her colleagues. She raised awareness of the SPP at regional and national events that she was involved with. 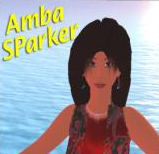 Amba joined the SPP in September last year and quickly became an active member of the team. She embraced the Schome ethos and confidently started planning events for newcomers with support from students, integrating the use of the wiki and discussion forum to support in-world activities.

Amba quickly became aware of some of the difficulties, and did her best to highlight the issues being faced by the community. She provided lots of great suggestions for ways in which issues might be addressed, and tried to work with staff and students to overcome these. However, we were hampered by lack of resources and I was reluctant to force some changes on the community against the majority’s expressed wishes. I fear that this meant privileging the established community members at the expense of newcomers, and probably undermined Amba’s confidence in the project.

Whilst many people in this situation would have dealt with it by walking away, Amba became more involved. She took on board the idea that the boundaries between learners and teachers are blurred and spent time trying to apply to the Schome Park model of collaborative learning to the process of making machinima she needed for a presentation.

Amba’s constant desire to deepen her understanding of how Schome might work led her to question and challenge what we were doing. I’m not sure how useful this has been for her, but it has certainly helped me. I have found her external viewpoint and insight extremely valuable – if sometimes a little uncomfortable!

Amba has been a consistent supporter of in-world initiatives and activities, always finding time to encourage and join in a host of student-led events. She is frequently the first to respond to in-world ‘emergency help’ requests. Amba has always kept up with developments in the forum though she has consistently resists being drawn too deeply into forum discussions. I think this is because she believes that the way in which it is being used adds little value and may even be a distraction from the more important aspects of the Schome Park Programme.

Amba quickly became aware of distinctions between ‘original’ and new staff - ‘original’ staff were transported from the Main Grid whereas new staff avatars are created on Schome Park directly – this means that all new staff have the same second name (SParker) which ‘original’ staff do not share. In addition the ‘original’ staff have a wide selection of items in their inventories which were obtained on the Main Grid and which are non-transferable – these include a variety of fancy clothes and accessories. Amba was also very conscious of the differences between the established students (who were part of the Schome Park Pilot) and new students – these included things such as the clothing which they had created, but more importantly their well-developed in-world skills, ‘insider knowledge’, and established friendship groupings.

Characteristically Amba came up with an original, creative and elegant solution which was to establish sessions in which community members could create clothing and accessories. The aim being to help them to get to know others in the community, whilst enhancing their wardrobes, and also learning some useful second life skills (making more advanced outfits requires some knowledge of the basics of building, scripting and image manipulation). As with many activities in Phase 3 of the project these sessions were hampered by the problems of recruitment (and retention) that have beset the programme (and which will be a focus of a future mini-case study).

Despite setbacks, Amba has remained cheerful and continued to be active in Schome Park – becoming a member of the core staff team. In many ways she epitomises what Schome Park should be all about – she is passionate about the quality of learners’ experiences and she continually strives to enhance our community, not giving up simply because the going is sometimes a little bit tough!

Nice One Amba, and thank you (and all the other folk who make the Schome Park Programme possible)!