In the Ethics and Philosophy forum, Topper proposed to organise a court case. He stated that he aimed to develop knowledge-age skills by running a number of sessions, including a murder mystery night, a court case and a discussion of the court case and legal system in Britain and America.

Sparkers volunteered to role play the accused, prosecution and defence laywers, judge, clerk of the court, witnesses and jury. These volunteers came from all sections of the community – including Sparkers from the UK, the Falkland Islands, the West and East coasts of the US. Sparkers worked on this for a five-month period which ended with an in-world session in which jury members were sworn in (see picture below). However, the planned court case nevr took place.

This activity caught the imagination of many Sparkers and staff, and provoked discussion from October 2007, when the idea was first proposed, until February 2008 when the timetabling proved impracticable. The project involved teamwork – the court case required at least 15 active participants, and it was also necessary to devise a scenario, build a courtroom, design and make costumes and carry out background research. The activity therefore demanded communication, confidence, creativity, leadership, motivation, problem solving and teamwork. These skills were demonstrated at high levels by participants and particularly by the organiser, Topper. Extensive forum discussion on the subject dealt with many elements of the English legal system, including charges, different types of plea, bail, tagging, and the principle of being judged innocent until proven guilty.

Individual timetabling problems The intention was to schedule the trial over a two-day period. It proved very difficult to co-ordinate a group of 15 or more individuals to commit to two consecutive sessions in world. For example ‘The Accused’ was interested and motivated, but had to turn down four proposed dates because of a swimming gala, a period in hospital, homework, and serious personal problems.

In-world problems The courtroom required planning permission from the Building department of the Sparkers’ government, which took time to be agreed. There was discussion about whether a specific building was needed and whether it needed to be permanent. In the end, it was sited 400 metres above the sim, which meant that some participants, particularly those new to Schome, had difficulty in finding it.

International problems The lone student from the Falkland Islands, although enthusiastic, found participation almost impossible due to slow internet speeds and high charges. Finding a time when Sparkers from England, California and New Jersey could access Schome at the same time proved almost impossible, particularly because many participants could not access Schome from school, and younger participants had to log off and go to bed relatively early in the evening.

After struggling with these problems for four months, Topper finally posted:

We need a weekend with both nights free and there’s none until March and I don’t really want to plan 4 weeks ahead, especially when last time half the computers crashed. This will probably be too difficult to work as it has to be after 8, before 9, and not clash with anything else.

Organising large-scale, international events is extremely difficult, particularly because teenagers only have limited control of their time and their access to technology.

Coverage of the swearing-in ceremony from the SchomeRanger’s microblog 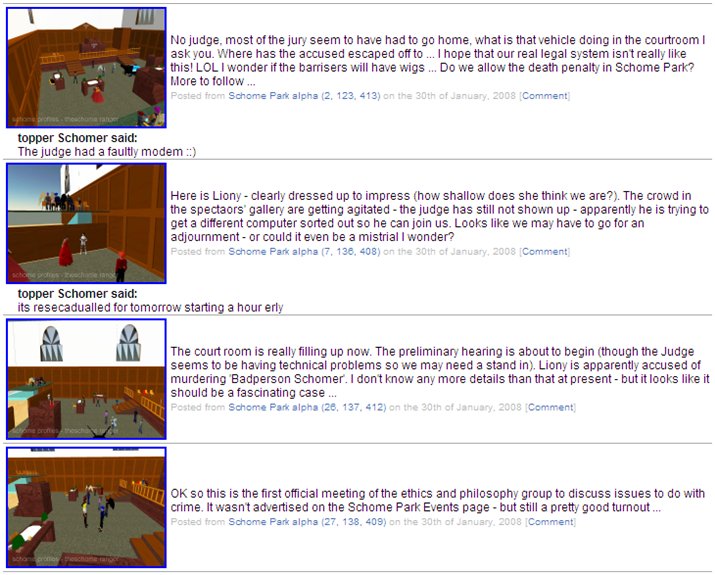 NB. Contrary to what the history might indicate, the original version of this was written by Fox. PeterT just cut and pasted it in here from the original wordprocessed version.