To what extent do the SParkers engage with Teen Second Life?

This is one of the three metrics we are using on the schome-NAGTY Teen Second Life Pilot - we want to find out if the SParkers engage to a greater extent with Schome Park/Teen Second Life (and the wider schome community website) than they do with the existing NAGTY forums. To that end we are collecting the following data:

These data will be compared with available data about levels of engagement with the existing NAGTY forums.

A quick statistics crunch from 19th March figures - approximately ten days into the pilot from when students could potentially gain access to SchomePark.

At that time, 85 of the 147 students that were signed up for the pilot had gone into SchomePark. This comprised:

The wiki and forum were beginning to be used by students. Login figures still to be examined, however a sizeable percentage of the students had posted on one or the other in the first ten days:

The first two weeks have seen a core of regular participants developing, with a wider number of more casual participants. There is still a considerable number who have not come into SchomePark. We have yet to understand how these are divided into those that want to participate but can't (see above, Problems section) and those that could participate but have chosen not to.

Forum: 40/ 147 students had logged into the forum to this date. 25 students have posted (top posters: Decimus and Trixxiee with 60 posts each). 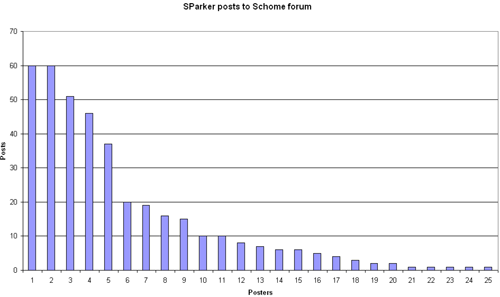 Wiki: 4 students to date have uploadfile permissions in the wiki - suggesting they are the most active posters. Students gain this right by asking one of the members of the support staff if they can post images or other files to the wiki.

Wiki: As of this morning, 56 SParkers had created an account and logged into the wiki. 52 of these 56 had made at least one edit. 7/56 had made over ten edits. Simple "edits" are likely to mean typing their name into one of the SchomePark sessions to sign up, though a good number of the Sparkers have done multiple edits which suggests more involved activity.

Wiki: There are 60 users with the family name "Schomer" in the wiki.

Click on the blue Members tab near the top of the Forum. You get a list of members and some info about them. If you click on a members' name, you can scroll down to additional information and access general statistics about them. For example, I can see that all your Forum postings have been between 8am and 8pm and that you're most likely to post between 1 and 2pm. PeterT's statistics on the other hand, reveal that he almost never sleeps :-) Fox

Thanks fox hehe I agree with you there. Wiki: There are 63 users with the family name "Schomer" in the wiki. 15 of these have created their own user page, 6 have uploadfile privileges (they have asked to be able to upload images).