From The SchomEmunity Wiki
(Redirected from RMS Titanic: Blog)
Jump to: navigation, search 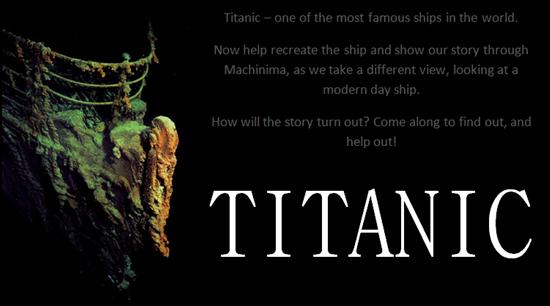 July, 1907. J. Bruce Ismay, managing director of the White Star Line, and Lord James Pirrie, chairman of the shipbuilding company Harland and Wolff, have come up with the idea to make three amazing vessels, the largest made by man: Titanic, Olypmic, and later on, Britannic.

Schome Park Machinima is directed by Marsbar9 Schomer and filmed by Pigment SParker. Work is underway to create the sets, and also the write the script. If you're interested, leave a note on the talk page.

The script is being made by Marsbar9 Schomer and should be completed, checked over, edited and approved by 1/2/08.

Building of sets and clothing needs to begin by 1/2/08 and completed, which involves all clothing being copy/mod and given to everyone (and a copy archived in SPTC) by 22/2/08

Agree who does what

The files need to have been sent to and received by the editor by no later than 16/5/08. Editing needs to have been completed and reviewed by 13/6/08

Contingency has been included in case we run out of time or a specific part of the project needs additional time/resources. This shouldn't be required however, as a strict (but open in time) timetable has been arranged.

This blog will be recording the events of the project. Feel free to add/extend a post.'

The timetable has been published and the deadline set.

The main outside is nearly finished, the walls need sorting, and the water needs extending, but work is coming along nicely. Baso brought over some UUIDs for textures used on the main grid. The interior is started, with the large dining room and grand staircase being planned.

Mars began work on making some plates fly off cupboards, but unfortunately to use a scultped prim plate, and to make them physical, they have to have a large gap between them.

The exterior gets a paint job, with the "Titanic" being put on the front of the ship.

The draft script is made, and Pigment gives tips on how to make the storyline better. Work continues on the sets.

The decision is made to begin planning the second machinima, Titanic. The main hull of the ship is made, and the script is started.