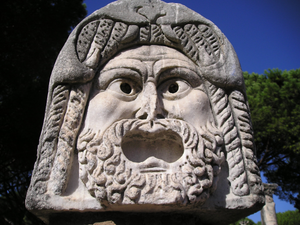 Ostia (from the Latin for ‘mouth’, ostium) was the main commercial port of ancient Rome, 30km away from the historic capital. Due to silting, it is now 4km away from the sea, but it is still on the banks of the Tiber. It was also a military base defending the mouth of the river.

It is thought that it was first established in the 6th Century BC, but the earliest found remains date from 320-340BC. It reached its height in the 1st and 2nd centuries AD, and in this time grew to a large town, reaching a peak of 75,000 inhabitants. However, levels of trade dropped in the 4th century, and the harbour began to silt up, leading to Ostia’s eventual decline.

With the fall of the empire, the town fell into decay, and was abandoned in the 9th century due to Arab raids and outbreaks of malaria. It was sacked in the middle ages and later left to ruin.

The excavations began in the 1700s, but they were sporadic, and it wasn’t until Pope Pius VII in 1805 and later Pius IX in 1870. The eminent Roman archaeologist Rodolfo Lanciani led these archaeological excavations. The renovation work continues to this day, but it is open to tourists, and is a short train journey from Rome. 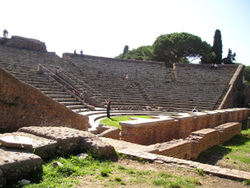 The Theatre at Ostia

A key building in Ostia is the Theatre, excavated at the end of the 19th century. It was built by Emperor Augustus in the 1st century BC and enlarged under Commodus, Septimus Severus and Caracalla in the 2nd and 3rd centuries AD. The brick outer ring was rebuilt in the 20th century, but the septa (dividing wall) supporting the cavea (audience seating) date from the first build by Augustus.

Performances are held in the renovated theatre during the summer.