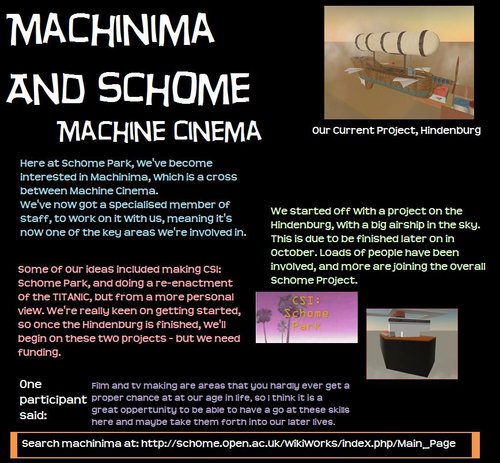 Machinima is a portmanteau of the words 'machine' and 'cinema'. It basically means filming computer-generated scenes.

Second life comes with built-in machinima tools, which film exactly what you see on the screen.

How to film in Second Life

You have several options:

And you're filming! Whatever you see on your screen is being recorded. (Repeat the first step to stop filming)

The alt-zoom camera is a moving platform, which you can use to create steady tracking shots. To get one, just ask Fox, Aston, Wheelo, Marsbar9, or anyone else who has one.

The camera should now move along the path of waypoints. You can now start recording (see how to use the built-in tools, above).